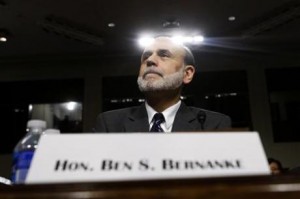 The decade of the 1990’s is America’s modern day equivalent of the Roaring 20’s.  Back then, we were making great strides in productivity.  We had near full employment, the government had a surplus of cash and the stock market was making many people rich.  The future looked so bright in December of 1996 that Fed Chief Alan Greenspan warned investors not to get carried away with the good times.  Greenspan asked this rhetorical question, “But how do we know when irrational exuberance has unduly escalated asset values, which then become subject to unexpected and prolonged contractions as they have in Japan over the past decade?” According to Yale Economics Professor Robert J. Shiller, Greenspan “. . . never actively used the words ‘irrational exuberance’ again in any public venue.”  (Click here for more from Shiller who wrote the best selling book titled “Irrational Exuberance.”)

Oh, what a difference a decade or so makes.  Just this past week, Fed Chairman Ben Bernanke testified in front of the Senate banking panel.  In opening remarks, Bernanke said, “. . . the economic outlook remains unusually uncertain. We will continue to carefully assess ongoing financial and economic developments, and we remain prepared to take further policy actions as needed to foster a return to full utilization of our nation’s productive potential in a context of price stability.” (Click here for a complete text of Bernanke’s prepared statement.)

The Fed Chairman told Congress he is not sure where the economy is going?  This doesn’t sound like “green shoots” or a “recovery” to me.   It sounds like a warning things may take a turn for the worse.  The only consolation is the Fed will “take further policy actions as needed.” That, to me, sounds like more money printing and bailouts if the economy rolls over, or maybe I should say when the economy rolls over.

I guess I should not be surprised with Bernanke’s “unusually uncertain” comment.  After all, just last month, he said, “I don’t fully understand movements in the gold price.” How can someone in charge of the world’s biggest gold reserve (more than 8,000 tons) be clueless about the rising price of gold?  (Click here for the Bernanke  gold comment story.)

The Chinese may be able to clear up the Fed Chief’s uncertainty about the economy and gold.  According to a Financial Times story (posted the same day as Bernanke’s Senate appearance), America is in deep financial trouble.  The head of China’s largest credit rating agency, Guan Jianzhong, chairman of Dagong Global Credit Rating, said, “The US is insolvent and faces bankruptcy as a pure debtor nation but the rating agencies still give it high rankings. . . Actually, the huge military expenditure of the US is not created by themselves but comes from borrowed money, which is not sustainable.” (Click here for the complete FT article.)

I think we are beyond the “borrowed money” phase and will go straight to “quantitative easing” or money printing when there is another meltdown. What else would the Fed do?  Lower interest rates?  They’re already at 0%.  Raise taxes?  Sorry, that is not in their power.  The Fed printed and spent $1.75 trillion, stopping the last near collapse of the financial system, and they will do it again.  Don’t take my word for it.  Just listen to Ben Bernanke’s sworn testimony.  Again, he said, “. . . we remain prepared to take further policy actions as needed . . .”

We have gone from “irrational exuberance” to “unusually uncertain” in just about 13 years.  This is a total repudiation of Federal Reserve policies.  Ironically, in the new financial reform legislation just signed into law, the Fed received vast new regulatory powers.  God help us.