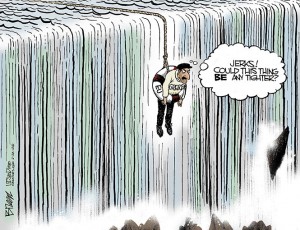 Yesterday, a short but ominous press release was issued at the Commodities Futures Trading Commission.  It said, “At the request of CME Clearing Europe Limited (CMECEL), pursuant to Section 7 of the Commodity Exchange Act, the Commodity Futures Trading Commission issued an Order on March 13, 2012, vacating the registration of CMECEL as a derivatives clearing organization.”  (Click here for the CFTC press release.)  In plain English, the Chicago Mercantile Exchange (CME) no longer wants to be the clearing house for European derivatives.   The derivatives market in Europe must have been very lucrative for the company.  After all, just the credit default swap (CDS) market is reportedly worth $50 trillion globally.  (A CDS is a form of insurance.  If there is a default, the debt is paid by the entity that sold the insurance contract.)  I ask myself, why would the CME willingly stop being the clearing house for this profitable and large market?

Just last week, it was reported there was a new Greek debt deal where 95% of the bondholders voluntarily agreed to take nearly a 75% loss on Greek debt.  CNBC reported, “Greece successfully closed its bond swap offer to private creditors on Thursday, opening the way to securing the funding it needs to avert a messy default on its debt, according to several senior officials. . . . The biggest sovereign debt restructuring in history will see bond holders accept losses of some 74 percent on the value of their investments in a deal that will cut more than 100 billion euros from Greece’s crippling public debt.”  Buried in the CNBC story was this little tidbit that said, “That would potentially trigger payouts on the credit default swaps (CDS) that some investors held on the bonds, an event which would have unknown consequences for the market.”  (Click here for the complete CNBC story.)

Is the CME exiting the European CDS market just when the proverbial CDS contracts are about to hit the fan?  This comes just after the CME’s 50 year old CEO, Craig Donohue, announced his retirement earlier in the week.  I am sure that is just a coincidence.  I know the mainstream media has been telling folks everything is just fine with the Greek debt crisis, but that’s not what a Member of the European Parliament said in an interview yesterday.  Nigel Farage said on King World News, “We sort of pretend that it didn’t happen and it wasn’t really a proper credit event, yet we know that various CDS’s are being triggered.  We also know that yesterday 110 private bondholders, who had held their bonds through German banks, are now taking legal action.  Just to top it all, the thing that almost made me laugh was that yesterday the German Finance Minister said, ‘We must be preparing now, any day, for a third bailout.’  So this idea that the leaders of Europe give that everything is fine, everything is not fine.”    The outspoken Farage went on to say. “You can argue that the ECB, by printing money, has staved off the crisis for a few weeks.  But the fundamentals haven’t changed one bit, the euro is in deep, deep crisis. . . . They are determined to prop up and keep together this completely failed experiment.  But they know as soon as they give in on Greece, the circus will move on to Portugal, Spain and possibly Italy.”  (Click here to read and hear the complete Farage interview on King World News.)

You might think the situation in Greece has stabilized, that everything is getting back to normal and, now, the Greeks can finally meet their debt payments.  If you did, you would be in the same delusional state Wall Street is in after a 200 point run-up yesterday.  A Testosteronepit.com post about Greece from last Friday said, “Unemployment is veering toward disaster. The overall rate of 21% in December, announced Thursday, was horrid enough, but youth unemployment rose to a shocking 51.1%, double the rate before the crisis. A record 1,033,507 people were unemployed, up 41% over prior year. Only 3,899,319 people had jobs—a mere 36.1% of a total population of 10.8 million!”  The story’s conclusion said, “We still don’t have a solution for Greece, so there will be a harder default to come,” predicted Charles Wyplosz, director of the Geneva-based International Center for Money and Banking Studies.”  (Click here for the complete post.)

To me, there are at least two big questions that need to be answered:  1) When will the final Greek default take place?  2) How much exposure do big foreign and domestic banks have to the CDS contracts sold on sour Greek debt?  I don’t have the answers, but I am sure we will get them in the weeks and months ahead.