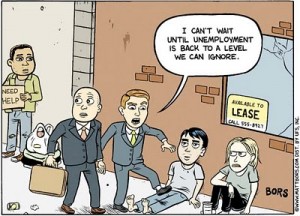 Headlines released after a better than expected jobs report painted a very optimistic picture.  Bloomberg’s headline read “Recession Concerns Ease on August Jobs Data.” The story said, “Companies in the U.S. added more jobs than forecast in August, easing concern the world’s largest economy is sliding back into a recession.  Private payrolls climbed 67,000 after a revised 107,000 increase in July that was more than initially estimated, Labor Department figures in Washington showed today. The unemployment rate rose to 9.6 percent as more people looked for work.” (Click here for the entire Bloomberg report.) Even though the official government unemployment rate inched up to 9.6% and 54,000 people lost their jobs, this jobs report was spun as some sort of ground breaking good news.  Market Watch had a similar take with its Friday headline, “U.S. stock futures jump as Wall Street relieved by jobs report.” (Click here for that story.) It looks like thoughts of the economy slipping back into a double dip recession are over if all you read are stories like these. Somebody should tell former Clinton Administration Labor Secretary Robert Reich of the great news on jobs.  On Friday (the same day the better than expected jobs report was released), he said on CNBC, “I don’t see how anyone could think this is headed in the right direction.” Reich also said the jobs picture “is worse than it was a year ago and worse than it was a month ago.” This is why Reich is advocating the government start new stimulus programs and calls this Labor Day “. . . the worst Labor Day in the memory of most Americans.” I don’t think Reich believes we are out of the woods as far as the economy goes.   On his blog he says, “We might consider, for example, extending the earned income tax credit all the way up through the middle class, and paying for it with a tax on carbon.” (Click here to go to Reich’s blog.)   I’m not sure giving more money away and a brand new tax is the answer to the spiraling economy.  I do agree with Mr. Reich that things are getting worse.  One thing is for sure, the President and his party are running scared on the jobs front.  That’s why the President announced he will be making big new economic initiatives this coming week.  According to Reuters, the President said Saturday, “The steps we have taken to date have stopped the bleeding. . . Other steps, he said, were aimed at helping the middle class. . .” (Click here for the complete Reuter’s story.) The Labor Secretary, Hilda L. Solis, said last week, “There are jobs out there. And, this Labor Day — and every day — I’m going to continue helping people find them and employers fill them.” Where are these jobs?   It looks like the employment picture is so bleak it’s come to making preposterous statements about jobs that do not exist. (Click here for the Solis statement on the August jobs report.) According to John Williams of shadowstats.com, it is much worse than any government numbers show.  In his latest report, actual unemployment rose to 22%.  That’s right, 22%, more than double the “official” 9.6% rate from the Bureau of Labor Statistics.  These are real unemployed people.  This is another government statistical scam designed to deceive people into thinking things are better than they are in the real world.  What is galling to me is the mainstream media repeats these statistical lies by the government unquestioned month after month.  Economist John Williams explains how the government gets away with being so removed from reality.  He says, ”In 1994, during the Clinton Administration, “discouraged workers” — those who had given up looking for a job because there were no jobs to be had — were redefined so as to be counted only if they had been “discouraged” for less than a year. This time qualification defined away the long-term discouraged workers. The remaining short-term discouraged workers (less than one year) are included in U.6.” U6, by the way, rose to 16.7% in the latest jobs report.  Simply put, if someone is out of work for more than a year, they are no longer counted in any government unemployment statistics.    Don’t expect the unemployment rate to start going down in the foreseeable future.  Williams says, “. . .  sharp upside movements in the unemployment rate remain likely in the months ahead . . .” Abraham Lincoln supposedly said, “How many legs does a dog have if you call the tail a leg?  Four. Calling a tail a leg doesn’t make it a leg.” Likewise, saying there “jobs out there,” or that less than 1 in 10 (9.6%) is out of a job, doesn’t make it so.  Just ask the 15 million unemployed Americans looking for work.