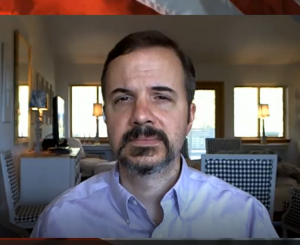 Journalist and book author Michael Snyder predicts, “Judgment is coming for America.”  Snyder lays out his case in his new book called “Lost Prophecies of the Future of America.”  Snyder says, “You look in the Bible and see ancient Israel, and God called on the people of Israel to repent.  You have gone into evil and repent and come back to me.  If you don’t come back to me, bad things are going to happen. . . . In our time, America has gone off into great, great evil.  What does a nation that has killed 60 million children (by abortion) deserve?  That is just one element of where we have gone horribly wrong.  In our day and time, God has sent men and women of God, and in my book . . . I have prophecies from the 1920’s, 1930’s, 1940’s, 1950’s and every decade up to today.  For example, look at West Coast seismic events, or whatever, and you will find dozens of prophecies from men and women of God from all over the world who have all seen the same thing.  What is remarkable is . . . all these people have seen the exact same thing coming, and that is because it is all coming from the same source. . . . So, it is really a summary or a bringing together of these voices . . . warning in advance of many things that are coming.  We were warned in advance a pandemic was coming, and most people don’t even realize it. . . . Another pandemic is coming too.”

The news is not all bad, and Snyder says, “One of the things the prophetic voices have seen is there is going to be masses of people turning to God.  It’s really going to be the greatest hour for the people of God since the Book of Acts.  We are going to set the stage for the return of our Lord and Savior Jesus Christ.  We are going to bring in the final harvest. . . . We are going to win souls.  When this stuff starts happening that I talk about in the book, people are going to go into depression and despair.  They are not going to understand why any of this is happening.  Most will not hear the warnings in advance.  They are going to think the world is going crazy and my life is ruined.  They are going to roll up in a ball and cry or commit suicide, but that is the exact opposite response we should be having.  God didn’t warn us about all these things in advance so we would be afraid, but so we wouldn’t be afraid. . . . We need to realize God is going to be moving and doing great things.  We can participate in it, but if we are in a corner crying because we are feeling sorry for ourselves because the world is going crazy, we are going to totally miss out on our purpose for why we are here in this hour. . . .We are going to have the greatest harvest of souls in history.”

Gold and silver rising in price along with inflation also has many prophecies accounted for in Snyder’s book.  Snyder says, “The impetus for this latest surge was the Federal Reserve.  Corona virus comes, and the Fed says the stock market is going down and we’ve got to rescue the financial markets.  So, what they did was flood the financial system with money.  It was like quantitative easing on steroids, and we have never seen anything like it. . . . The stock market has gone to record highs, meanwhile 58 million Americans have filed for unemployment.   These are new claims over the last 23 weeks.  So, the real economy is totally imploding. . . . We are going down the same path as Zimbabwe . . . Gold is not going up.  The dollar is losing value, and it’s going to get a lot worse.”

Join Greg Hunter as he goes One-on-One with Michael Snyder, author of the new book “The Lost Prophecies of the Future of America.”

Besides TheEconomicCollapseblog.com, Michael Snyder has two other free websites: EndoftheAmericanDream.com and TheMostImportantNews.com.

Michael Snyder has also published five popular books. The latest is called “The Lost Prophecies of the Future of America.” You can find all of Michael Snyder’s books by clicking here.