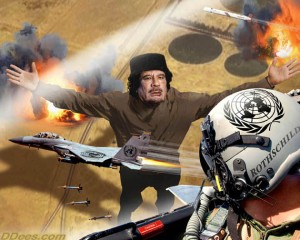 Today is the day the United States turned over the Libyan no-fly-zone mission to NATO.  This idea sounds absurd to me because the U.S is the backbone of the North Atlantic Treaty Organization.

Former U.N. Ambassador John Bolton said, this week, handing over command and control from the U.S. to NATO was “like handing over from the right hand to the left hand.” What is most upsetting about the Libyan war is there is no clear plan or stated goals by the President.  During his speech, it was almost as if the President was saying he didn’t have a plan, but he didn’t have to because now the international community is taking over.  Also, in his speech this week, he took great pains to tell how it took only “31 days” to build an international coalition to attack Libya.  Why wasn’t this issue debated on the floor of Congress?  After all, “We the people”are paying for this mess at a rate of $100 million a day.  Gaddafi may not survive, but what kind of government will take his place if he is booted out?  It has been widely reported that Al-Qaeda is supporting the rebels.  I thought we were fighting a “war on terror” against them?

I hope this turns out well, but I fear this is another gigantic mess.  I am not the only one who thinks a Libyan war is a bad idea.  Alexander Cockburn from Counterpunch.org thinks this military action is flat out stupid and wrote an excellent post a few days ago that lays out his case.  Please enjoy his work. –Greg Hunter—

Libya, Oh What a Stupid War

The war on Libya now being waged by the US, Britain and France must surely rank as one of the stupidest martial enterprises, smaller in scale to be sure, since Napoleon took it into his head to invade Russia in 1812.

Let’s start with the fierce hand-to-hand combat between members of the coalition, arguing about the basic aims of the operation. How does “take all necessary measures” square with the ban on any “foreign occupation force of any form on any part of Libyan territory.” Can the coalition kill Qaddafi , and recognize a provisional government in Benghazi?  Who exactly are the revolutionaries and national liberators in eastern Libya?

In the United States  the intervention was instigated by liberal interventionists: notably three women, starting with Samantha Power, who runs the Office of Multilateral Affairs and Human Rights in  Obama’s National Security Council. She’s an Irish American, 41 years old, who made her name back in the Bush years with her book  A Problem from Hell, a study of the U.S. foreign-policy response to genocide, and the failure of the Clinton administration  to react forcefully to the Rwandan massacres. She had to resign from her advisory position on the Obama campaign in April of 2008, after calling Hillary Clinton a “monster” in an interview with the Scotsman, but was restored to good grace after Obama’s  election, and the monster in her sights is now Qaddafi.

America’s UN ambassador is Susan Rice, the first African American woman  to be named to that post. She’s long been an ardent interventionist. In 1996, as part of the Clinton administration, she supported the multinational force that invaded Zaire from Rwanda in 1996 and overthrew dictator Mobutu Sese Seko, saying privately that “Anything’s better than Mobutu.” But on February 23 she came under fierce attack  in the Huffington Post at the hands of Richard Grenell,  who’d served on the US delegation to the UN in the Bush years. Grenell dwelt harshly on instances where in his judgement Rice and her ultimate boss  Obama were drooping the ball, and displaying lack of leadership amid the tumults engulfing the middle east and specifically in failing to support the uprising against Qaddafi.

Both Rice and Clinton took Grenell’s salvo to heart. Prodded by the fiery  Power they abruptly stiffened their postures and Clinton lobbed her furious salvoes at Qaddafi, “the mad dog”.  For Clinton it was a precise re-run of her efforts to portray Obama as a peace wimp back in 2008, liable to snooze all too peacefully when the red phone rang at 3am.

For his part, Obama wasn’t keen on intervention, seeing it as a costly swamp, yet another war and one opposed by Defense Secretary Gates and the Joint Chiefs of Staff. But by now the liberal interventions and the neo-cons were in full cry and Obama, perennially fearful of being outflanked, succumbed, hastening to one of the least convincing statement of war aims in the nation’s history. He’s already earned a threat of impeachment from leftist congressman Dennis Kucinich for arrogating war-making powers constitutionally reserved for the US Congress, though it has to be said that protest from the left has been pretty feeble. As always, many on the left yearn for an intervention they can finally support and many of them have been murmuring ecstatically, “This is the one.” Of course the sensible position (mine)  simply states that nothing good ever came out of a Western intervention by the major powers, whether humanitarian in proclaimed purpose or not.

So much for the instigators of intervention in the US. In France the intellectual author is the intellectual dandy and “new philosopher” Bernard-Henri Lévy, familiarly known to his admirers and detractors as BHL. As described by Larry Portis in our current CounterPunch newsletter, BHL arrived in Benghazi on March 3.

“His message was urgent but reassuring. “No,” he said, Qaddafi  is not capable of launching an offensive against the opposition. He does not have the means to do so. However, he does have planes. This is the real danger.” BHL  called for the scrambling of radio communications, the destruction of landing strips in all regions of Libya, and the bombardment of Qaddafi’s  personal bunker. In brief, this would be a humanitarian intervention, the modalities of which he did not specify.

“Next step, as BHL explained: “I called him [Sarkozy] from Benghazi. And when I returned, I went to the Elysée Palace to see him and tell him that the people on the National Transition Council are good guys.” Indeed, on March 6, BHL returned to France and met with Sarkozy. Four days later, on March 10, he saw Sarkozy again, this time with three Libyans whom he had encouraged to visit France, along with Sarkozy’s top advisors. On March 11, Sarkozy declared the Libyan National Transition Council the only legitimate representative of the Libyan people. Back in Benghazi, people screamed in relief and cheered Sarkozy’s name, popularity at last for Sarko, whose approval  ratings in France have been hovering around the 20 per cent mark.”

So much for the circumstances in which intervention was conceived. It has nothing to do with oil; everything to do with ego and political self protection. But to whom exactly are the interveners lending succor? There’s been great vagueness here, beyond enthusiastic references to the romantic revolutionaries of Benghazi, and much ridicule for Qaddafi’s identification of his opponents in eastern Libya  as Al Qaida.

In fact two documents strongly back Qaddafi on this issue. The first is a  secret cable to the State Department from the US embassy in Tripoli in 2008, part of the Wikileaks trove, entitled “Extremism in Eastern Libya”which revealed that this area is rife with anti-American, pro-jihad sentiment.

According to the cable, the most troubling aspect

“… is the pride that many eastern Libyans, particularly those in and around Dernah, appear to take in the role their native sons have played in the insurgency in Iraq … [and the] ability of radical imams to propagate messages urging support for and participation in jihad.”

The second document or rather set of documents are the so-called Sinjar Records, captured Al Qaeda documents that fell into American hands in 2007. They were duly analyzed by the Combating Terrorism Center at the U.S. Military Academy at West Point. Al-Qaeda is a bureaucratic outfit and the Records contain precise details on personnel, including those who came to Iraq to fight and when called for, to commit suicide , fighting American and Coalition forces.

The West Point analysts’ statistical study of the al-Qaeda personnel records concludes  that one country provided “far more” foreign fighters in per capita terms than any other: namely, Libya. The  records show that the “vast majority of Libyan fighters that included their hometown in the Sinjar Records resided in the country’s Northeast.”  Benghazi provided many volunteers. So did Darnah, a town about 200 kms east of Benghazi, in which an Islamic emirate was declared when the rebellion against Qaddafi started. New York Times reporter Anthony Shadid even spoke with Abdul-Hakim al-Hasadi who promulgated the Islamic emirate. Al-Hasadi “praises Osama bin Laden’s ‘good points,’” Shadid reported, though he prudently denounced the 9/11 attacks on the United States. Other sources have said that  this keen admirer of Osama would be most influential in the formation of any provisional government.

The West Point study of the Iraqi Sinjar Records calculates that of the 440 foreign al-Qaeda recruits whose hometowns are known, 21 came from Benghazi, thereby making it the fourth most common hometown listed in the records. Fifty-three of the al-Qaeda recruits came from Darnah, the highest total of any of the hometowns listed in the records. The second highest number, 51, came from Riyadh, Saudi Arabia. Darnah (80,000) has less than 2 per cent the population of Riyadh. Darnah contributed “far and away the largest per capita number of fighters.”

As former CIA  operations officer Brian Fairchild writes, “Amid the apparent absence of any plan for post-Gaddafi governance, an ignorance of Libya’s tribal nature and our poor record of dealing with tribes, American government documents conclusively establish that the epicenter of the revolt is rife with anti-American and pro-jihad sentiment, and with al-Qaeda’s explicit support for the revolt, it is appropriate to ask our policymakers how American military intervention in support of this revolt in any way serves vital U.S. strategic interests.”

As I wrote here a few weeks ago, “It sure looks like Osama is winning the Great War on Terror.” But I did not dream then that he would have a coalition of the US, Great Britain and France bleeding themselves dry to assist him in this enterprise.

Click here if you want to go to counterpunch.org.