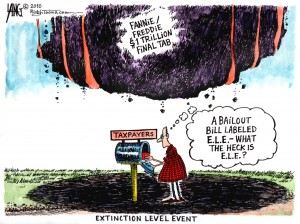 Second quarter GDP growth numbers were revised down last week to a paltry 1.6% from 2.4%.  Wall Street celebrated because some were expecting “growth” to be revised even lower.  The stock market shot up on this news, but should everyone feel relieved because the U.S. got at least some growth?  Consider this–we paid dearly for that 1.6% growth.  If you add up what was spent on TARP, the stimulus bill, nearly $2 trillion spent by the Fed buying mortgage backed securities and Treasuries and all commitments to Fannie, Freddie, FHA and the FDIC, you come up with a total of about $3.7 trillion.  This is what it cost to support the U.S. financial system according to Neil Barofsky, the Special Inspector General for the Troubled Asset Relief Program. (Click here for more on this story.)

To me, spending or committing $3.7 trillion to the American economy and getting just 1.6% growth is frightening.  Expert trader Dan Norcini had a very sarcastic take on this subject in a recent post at JSMineset.com.  He said, “The fact that it has taken gazillions of conjured-into-existence-out-of-no-where dollars (some call that stimulus) to produce this pitiful growth rate number for the quarter, seems to have escaped the attention of the equity perma bulls who have yet to come to grips with the consequences of all of this. My own view is that it should be a relatively easy matter to get that growth rate up to double the figure given us. All we would need to do to get to 3.2% growth rate is to print twice the number of Dollars and double the rate of government indebtedness.”  (Click here to read Norcini’s entire article.)

To John Williams of shadowstats.com, anemic growth was not a surprise.  In an interview yesterday, Williams told me, “The money that was spent just went to support the banking system to help prevent a systemic collapse.  They have prevented a collapse, that’s a big plus. . . . It was not designed to stimulate the economy.  It was designed to prevent a systemic collapse.”  We did get some stimulus from the home buyers tax credit and cash for clunkers.  That’s now gone, and it probably robbed sales of cars and houses from the future.

So where does that leave us?  We just had dismal numbers reported on jobs, housing and GDP.  Does that mean we are at a bottom?  Not a chance.  If we really were in this so called recovery, wouldn’t we have much stronger growth?  Sure we would, and the Fed also knows there is something very wrong.  It recently announced it would spend at least $10 billion a month buying Treasuries.  The Fed also suggested it would act to keep the economy from sliding further.  That doesn’t sound like a recovery to me.  It sounds like further money printing is in the cards as the economy continues to falter.

Williams predicts the banks are going to need another “bailout.”  He also told me, next year holds a “particularly high risk for a major systemic disorder, a heavy sell off of the U.S. dollar and early stages of hyperinflation.” He also thinks the stock market is “irrational, unstable and terribly dangerous.”

In my interview, I asked Williams where people should invest money for safety.  He would not give specific asset categories, but he did say, “You want to be in hard assets that will retain their value against inflation.”

That sounds to me like a warning to lighten up on the stock market and buy things such as silver and gold coins.  If nothing else, be conservative and protect yourself from the downside risk.  It appears the economy is set for another slide.