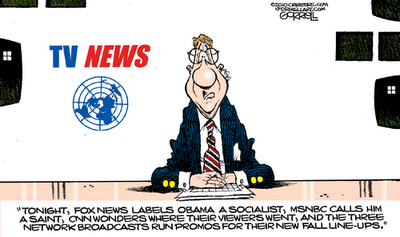 Recently, a new Gallup poll delivered some bad news to mainstream media–only one fourth of people asked believe what it says.  The Gallup story said, “Americans continue to express near-record-low confidence in newspapers and television news — with no more than 25% of Americans saying they have a “great deal” or “quite a lot” of confidence in either.”  (Click here for the complete Gallup story.)

This is not a recent trend according to Gallup and other polls done on this subject.  Last summer, comedian Jon Stewart of the “Daily Show” was “Most Trusted” newscaster.  I wrote about this in a piece I did last year called “The Soft Truth.”  I said, “He had almost as many votes as Charlie Gibson and Brian Williams combined.  Katie Couric, according to the Time Magazine poll, came in dead last.  Boy, if that is a not a wake-up call to mainstream media, I do not know what is. . . . Doing superficial event type news programming is something I call “The Soft Truth.”  It is more or less superficial news and is cheap, fast to produce, and you will not make enemies. The news in mainstream media has mostly become just the stuff between the commercials. Then, there is what I call “The Hard Truth.” This story is not cheap, it ties up the company lawyers and management and, if done right, you will piss some people off.  And even if there are cutbacks because of advertising shortfalls, you can still ask hard questions.”  (Click here for the complete soft truth story for September of 09.)

Do you see any reporters even asking any hard questions these days?  I guess I should be happy the mainstream media is in the tank because Internet sites like this one and many others are gaining popularity for exposing “The Hard Truth.”  I am also not exactly sure why the mainstream media acts this way.

Maybe the press, as a whole, is just not brave enough to put out the real story.  Some journalists are doing good reporting, but often their stories are downplayed or are accused of spreading unfounded doom and gloom for telling the truth.   Maybe corporate America, which owns most of the mainstream media, is subtly distorting the news to make things look better than they really are.   The mainstream media completely missed the financial meltdown of 2008 and covered it like some unforeseen event.  There were plenty of signs we were headed for trouble, and no one wanted to report on them except a few people.  Here is what I said on CNN in March 2008.

Now, we are headed for trouble again and, yet, the mainstream media is engaged in this idiotic debate on whether or not there is going to be another plunge in the economy.  Nearly all the signs are pointing down, and difficult questions are arising about the solvency of America.  Recently, Laurence Kotlikoff, an economics professor at Boston University, cited an IMF report and said the U.S. is “Bankrupt.”  Why is this not news and at least worthy of as much equal time as the pin-headed Jet Blue flight attendant that slid down an escape hatch at JFK airport?  Please tell me why the USA being “bankrupt” isn’t of profound importance to every single American?  Every week, the mainstream media makes my point by pushing worthless cheap content.  It budgets for superficial stories (The Soft Truth) and ignores the really important stuff (The Hard Truth) that might call for some tough questions and ruffled feathers.

I worked for ABC and CNN for 9 years as an investigative reporter.  I didn’t get a story on the air without approval from the company lawyers and management.   The networks and cable are doing a lot less of that kind of work these days because they don’t want to spend the money.  Mainstream media is putting its resources on superficial stories instead of covering news that really affects your life.   So, when I hear polls that say people do not trust the mainstream media, I am not surprised.