Home
»
Market Analysis
»
Make No Mistake–Europe is in Big Trouble 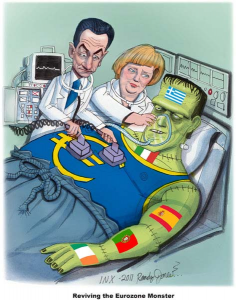 Treasury Secretary Tim Geithner said yesterday that European states “are going to have to do more” to solve their enormous debt troubles.  To that I ask, “more” of what?  That can only be “more” money printing.  Mark my words, more debt and fiat currency will be the ultimate answer to the European debt problem.  It is either that or let the banks and some countries in Europe go under.  If Greece was the only country to default and leave the EU, then that would not be all that bad.  The real problem is all the other heavily indebted countries that are levels of magnitude more of a problem than little Greece.  France24.com reported yesterday, “The Eurozone crisis could wreck the European Union, top EU officials warned on Wednesday as the leaders of Germany and France held talks with Greece to avoid a default and widespread chaos.  The pressure rose on all fronts with United States again expressing great concern, with Treasury Secretary Timothy Geithner saying European states “now recognize they are going to have to do more” to resolve to the crisis.  Highlighting the threat to the global economy, Geithner is to exceptionally attend talks between European Union finance ministers and central bankers in Poland on Friday.

French President Nicolas Sarkozy, German Chancellor Angela Merkel and Greek Prime Minister George Papandreou were to hold a teleconference late Wednesday as markets price in a default by the government in Athens, and credit rating giant Moody’s downgraded two major French banks given their exposure to Greek debt.  “Europe is in danger,” Polish Finance Minister Jacek Rostowski, whose country currently chairs EU meetings, told the European Parliament in Strasbourg.  “If the eurozone breaks up, the European Union will not be able to survive,” he added.  At his most dramatic, Rostowski even warned that “war” could return to Europe if the crisis fatally weakens the EU, founded amid the rubble of World War II.

His underlying message was backed up by European Commission president Jose Manuel Barroso, who described the crisis as “the most serious challenge of a generation.”  Barroso stressed: “This is a fight… for the economic and political future of Europe.”  EU economic affairs commissioner Olli Rehn warned that “a default or exit of Greece from the eurozone would carry dramatic social, economic and political costs.  “Not only for Greece, but also for euro area member states, other EU states, as well as global partners.”  He said what Europe needed was a moment of clarity leading towards a federal future, “and that moment must start today.”  Barroso announced he will “soon” present proposals for Eurozone states to issue joint bonds, a way to even out interest rates among the single currency area’s 17 nations.  Such “Eurobonds” are currently opposed by Germany and could require a new round of painful EU treaty negotiations.

Meanwhile Italy’s lower house of parliament endorsed its government’s 54.2 billion euro ($74 billion) austerity package — although a final vote of passage will not come until the evening.  Italy’s debt stands at 120 percent of gross domestic product, and many analysts are convinced it is next in line to draw sustained bond-market fire.  Stocks in Europe and the United States rose in the run-up of the Sarkzozy-Merkel-Papandreou talks.  Sarkozy will “do everything to save Greece,” government spokeswoman Valerie Pecresse said, with the Greek government struggling to squeeze more savings out of its recession-ravaged budget.  (Click here for the France24.com story.)

If Europe implodes from its debt mess, then the crater from that blast will surely suck the U.S. down right along with it.  Remember, nearly half of the 20 “Primary Dealers” of Treasuries are European banks. You want more proof the EU (and for that matter, the entire western world of fiat money system) is in trouble?  Here is another story for you, and the headline says it all: “20 Quotes From European Leaders That Prove That They Know That The Financial System In Europe Is Doomed.”   (Click here for that story from Beforeitsnews.com.)