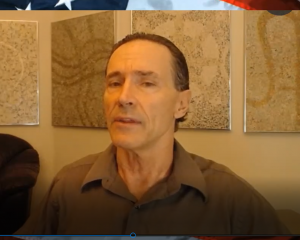 West Coast wildfires, wild temperature swings and hurricanes in the Gulf are all part of the consequences of man-made weather modification called Geoengineering.  Climate engineering researcher Dane Wigington says, “People need to unite in the fight against climate engineering because it’s killing us all. . . . If we look at this mathematically, climate engineering and all of its ramifications are the greatest threat we collectively face short of nuclear annihilation.  The ramifications are beyond grave.  There can be no legitimate discussion about the climate, or the the state of the climate from any perspective, without addressing this issue first.”

More than five years ago, Wigington warned then Lieutenant Governor Gavin Newsom (who is now Governor of California) about the devastating and uncontrollable fire destruction coming to the West Coast.  Record high temperatures along with a record amount of millions of acres have been torched this year in California alone.  Wigington remembers, “I had a private meeting with Gavin Newsom and his top aid in his office in the capitol, and I gave a full presentation on the climate engineering issue.  They did not dispute the data.  They couldn’t dispute the data.  We have seen no acknowledgment from Governor Newsom, even as the state is burning to the ground, which is exactly what I told him would happen.”

Wigington says if you want to heal the planet, then stop geoengineering now.  Wigington contends, “It is the single biggest leap we could make in the right direction.  What we have is the environmental groups trying to protect their 501- (c) (3) nonprofits, and they are told not to talk about this issue–period.  This is a taboo subject that they will not touch.  How can you have a discussion about the state of the climate if you do not acknowledge the single greatest disrupting factor of all?  What has set the template for these fires to burn with such ferocity?  That is absolutely climate engineering.  It is cutting off precipitation, toxifying soils with the elements used in climate engineering . . . . That poisons the root systems and kills the trees from the bottom up.  Geoengineering is destroying the Ozone layer.  That’s releasing immense solar radiation, and that is killing trees from the top down.  These particles are electrically conductive, creating far more dry lightning, which is igniting more fires.   These materials, aluminum, barium and strontium particulates, are incendiary, which means they are flammable.  This means they are coating forests from every conceivable direction.  Climate engineering is the issue that must be acknowledge in regard to the ferocity these fires are burning.”

Wigington also ties Bill Gates, CV19 and climate engineering together, and it is an ominous thing.  Wigington explains, “The world’s second most recognized climate engineer, Dr. Ken Caldiera . . . we have him on record stating one of the jobs he did for the Department of Defense (DOD) was to design ways to spray pathogens into clouds to effect the populations below. . . . Who does he work for now?  He works for Bill Gates.  We have peer reviewed studies that CV19 has been found on atmospheric particles.  When you look at the uniformity of how this was spread around the globe, they had to be aerosol dispersion.  It was too uniform and spread too quickly. . . . You can’t hide from needing to breathe air.  If this is being dispersed, how do we hide from that?   We have these characters working together, and what kind of a picture does that paint?  This is weather warfare.  It’s bio warfare, and it’s an all-out assault. . . . Those in power have long stated that there are too many people on the planet. . . . We better face this picture squarely now because we are rapidly running out of time.”

To see the trailer for the upcoming free film called “The Dimming” click here.

Click here to see email exchanges with Governor Newsom and Dane Wigington that date back a few years.