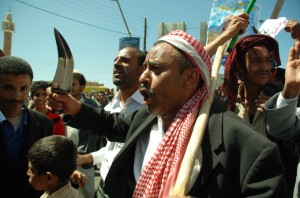 This week, protests in the Middle East continued to take hold in countries such as Bahrain, Algeria, Yemen and even Iran.  Call it Middle East unrest, the pro-democracy movement or people just fed up with dictators in power.

I pray for all men to be free and to have democracy, but freedom and democracy cannot produce energy, rainfall or fertile farm ground.  Those things are necessary for life itself.  A reader sent me a disturbing set of facts about Egypt, the most recent country to topple its dictator. The “math,”as   financial writer and scientist Chris Martenson says, is “relentless,” and as my reader writes, “demonstrates that no matter who rules Egypt, future prospects are grim.”

Egypt looks to be long on population growth and short on natural resources.  James Howard Kunstler writes about dwindling resources in some of his futuristic books.  His expertise is oil.  If you don’t have it, then you can’t do much else in today’s world.  And just because Egypt got Mubarak to step down, doesn’t mean its democracy will thrive and its problems are over—far from it.  I wish the very best for the people of Egypt, but the road to true democracy will be difficult.  Please read Mr. Kunstler’s take on the not-so-distant future of Egypt and the Middle East. –Greg Hunter.–

For a month, Egypt has been a magic mirror for America to behold its own wonderfulness, like a diorama of “Freedom and Democracy” out of a Kentucky creationist museum.  In this, our hour of national narcissism, we imagine a replay of Bunker Hill, Valley Forge, and Yorktown – with a falafel on top – in the streets of Cairo in order to prop up our own disintegrating self-esteem, while committing arson on our national household.

Also conveniently forgotten for the moment – because there’s nothing dramatic about nothing happening – is that a particular corner of the Middle East remained stable for thirty-odd years. Did we fork over $70 billion to Hosni Mubarak during that period so he wouldn’t start another war? Could be. But it was surely money better spent than the even larger nut we dropped all at once on AIG, Goldman Sachs, and a few other domestic fungi on the tree of liberty back home. And we’re still shoveling billions from the Federal Reserve into a claque of Too-Big-To-Fail banks in the form of a ZIRP loan carry trade under the pretense that they can use it to shore up their “reserve ratios.” A lot of people from New Jersey to Seattle need their reserves shored up, too, but they can forget about running personal ZIRP carry trade rackets out of the Fed’s loan window.

Contrary to what some readers suppose, cynicism (as in, thinking the worst of everything about everyone) is really not my bag – though comedy is another matter. However, if ever cynicism was an appropriate response to something, it would be the initial throes of a political revolution. The early triumphs in and around Paris after 1789 must have been soul-stirring, but you could forgive a casual observer who caught the scent of trouble in the air – and what followed was a years-long dismaying merry-go-round of mis-rule that climaxed in the Reign of Terror and finally resolved a full decade later in the crowning of another absolute monarch: the emperor Napoleon.  Gazing back at all that, it really took France nearly a century to get its act together politically from the moment that the governor of the Bastille surrendered his keys.

All forms of government in recent times find themselves in the same predicament: the mismanagement of contraction. Too many people and too many enterprises are competing for a contracting resource base. In many poor countries it expresses itself plainly as expensive food, or no food at all for some. The expensive food part of the story is already being felt in the wealthier countries, too, but the contraction expresses itself more in terms of money – many people do not have enough, or else much less than they were used to having, and at the same time the money that does circulate seems increasingly worthless. So we have the great debate over whether the contraction is deflationary or inflationary.

That debate could not happen if money retained its essential meaning as a reliable medium of exchange, but the idea of what exactly money is, is becoming increasingly clouded everywhere as compound interest fails in the face of contraction. And as compound interest fails – in the form of loans that can’t be repaid – the banking system implodes. This implosion has been artfully papered over with enough accounting tricks so that many citizens do not even perceive it as being underway. The results are insidious: falling living standards, no role to play in the economy (that is, a job), and a shocking array of social pathologies ranging from nearly universal family dysfunction to men acting like babies to obscene discrepancies in income.

The one thing that’s not contracting for now is the human population, inarguably in overshoot in relation to available resources, but population is a lagging indicator. Some people will still have sex, and produce the results of it, even when they’re starving. But meanwhile disease and strife creep into picture and you get the failure of public health systems, and military misadventures over oil or water, and after a while even a lagging indicator gets dragged into center stage. Of course, I’m persuaded that arguing about “overpopulation” is rather silly, since we are not going to do a goshdarn thing about it in terms of policies or protocols. (My own suggestion to make abortion retroactive has not been greeted with enthusiasm.)

You could probably pick the next location in the Middle East revolution derby by pitching a dart at the map. Just about all of them are ready to go up in flames for one reason or another – that really boil down to dwindling resources. And then, there are the various beefs, grudges, and jealousies that could prompt conflict between them, too. Lots of folks, for instance, are probably wondering what Hezbollah aims to do with its impressive collection of rockets.

I don’t blame poor Mr. Obama for trying to keep the lid on all this – which is arguably a conceit in itself – since the country that he is most in charge of whirls around a very impressive drain of hopeless debt and vanishing prospects. But my guess is that the next big event in the center ring of current affairs will be a First World money crisis. It is true that the stock market only goes up. And then, one fine day, a large, angry, long-necked bird unfurls a set of elegant black wings and goes honking off into a red sun, and suddenly you are in a new realm where the stock market only goes down… and certain sovereign bond rates soar with that angry bird… and things Too-Big-To-Fail fall on their asses and fail… and everything changes.

We read this morning that Egypt is under martial law with a suspended constitution – a logical step, given the army takeover, but not something that makes you want to buff up your flag lapel pin and say a prayer for the ghost of Winston Churchill. Things are definitely in flux. Here in upstate New York, the sap is about to run in the diseased maple trees.