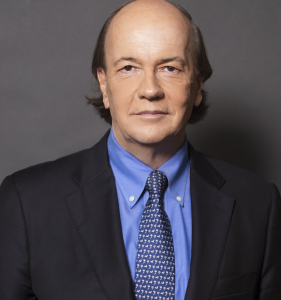 Financial expert and four time, best-selling book author James Rickards says there is no avoiding another economic collapse. Every time the economy suffers a setback, such as recently hitting a $20 trillion debt ceiling in the United States Congress, things get a little worse. Rickards explains, “The point of my books, ‘The Death of Money’ and my more recent book ‘The Road to Ruin,’ is that these are like snowflakes building up to cause an avalanche.  The avalanche is the instability of the financial system as a whole.  The concentrations of assets among the banks, the interconnectedness of the system, and almost a $1 quadrillion, not $1 trillion, $1 quadrillion, that’s a $1,000 trillion of notional value of derivatives, all these things are unstable.  What does it take to cause that avalanche?  What does it take to cause a loss of confidence in the system?  These are major body blows.  When you say the government will shut down or you say the government can’t borrow, the Congress is really playing with fire here.  We are going through some very dangerous periods.  I am not saying the system is going to collapse in the next 30 days.  I am saying the system is very vulnerable to collapse, and it will collapse sooner than later.  These are the kind of things that can cause it. . . . We are really playing with fire here.”

So, could we be facing a “Mad Max” world if the financial system totally crashes? Rickards says, “In ‘Road to Ruin,’ I talk about what I call the money riots.  There is a lot of reasons for rioting.  When you start shutting banks and the stock exchange and they say you can’t get your money, it’s only temporary, trust us, people will go out and start to burn down banks.  The government is ready for that also with emergency response and martial law. . . . Governments don’t go down without a fight. . . . You can see the shutdown coming because they will try to buy time until they come up with a solution, whether it’s gold, Special Drawing Rights (SDR), guarantees or whatever it might be.  There are only two or three possibilities here, but all of them will take time, and they will have to shut down the system. . . . People will not sit for that.  So, that means people will riot.  They’ll burn down banks.  They will smash windows, but what is the reaction to that?  The answer is martial law, militarized police, actual military units and you get something that looks like fascism pretty quickly.”

Rickards, who was one of the few that predicted a Trump Presidential win, says the new President has battles on many fronts. Rickards contends, “It’s one thing to say there is an opposition to a President.  There is always some opposition to the President.  It’s a two-party system.  What we see now is extreme.  Trump didn’t get a honeymoon, he got a burning bed.  Trump is facing four pockets of resistance.  There is the Deep State, the resistance, the media and even the Republican Party as we saw in the Obamacare repeal.  I am not saying they are all in this together as some deep dark conspiracy, they don’t have to be. . . . President Obama has set up an anti-White House about two miles from the real White House.  It is a government in exile, or an opposition government.  He’s operating through a front company called Organizing for Action (OFA).  He’s not organizing for America, he’s organizing for action.  This is the continuation of the 2008 and 2012 Obama campaign. . . . Trump is not up against normal political opposition.  He’s up against the resistance and the Deep State . . . . They want one of two things.  They want to impeach Trump and remove him from office, force him to resign or, at a minimum, make him so ineffective he is a place holder until the next election.  They are not out to oppose the Trump Presidency, but to destroy the Trump Presidency.  This is extraordinary, and I call it America’s New Civil War.”

With all the financial and political chaos on the horizon, Rickards strongly suggests “people have at least 10% of your financial wealth in physical gold and silver.”

Join Greg Hunter as he sits down with four time, best-selling author James Rickards, with his newly updated paperback book “The Death of Money.”

(There is much more in the nearly one hour long, in-depth interview.)

You can find free information, analysis, tweets, and articles on JamesRickardsProject.com. You can also subscribe to James Rickards’ monthly newsletter called  Strategic Intelligence, by clicking here.  Rickards is giving away some free stuff with this offer.  For a newly updated paperback copy of Rickards’ best-selling book “The Death of Money,” click here.