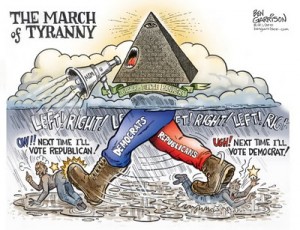 I want to share with you two videos that will surely enlighten and maybe even enrage you.  The first is from “The Daily Show.”  It seems a comedy show that repeatedly claims to do “fake news” was the only mainstream media outlet to call BS on Fed Chief Ben Bernanke’s BS.  Bernanke stated on “60 Minutes” last Sunday that the Fed was “not printing money.”  This statement is preposterous, in light of the fact the Fed is creating $75 billion a month to buy the debt of America.  I worked for two networks as an investigative correspondent, and I know how things are supposed to work.  The “journalists” that should have called out Bernanke on this obvious misstatement were “60 Minutes.”  It is a Cardinal Sin for a news broadcast to knowingly allow false statements to go out over the air unchallenged.  “60 Minutes” could have called a dozen PhD level economists to refute Bernanke’s assertion that the Fed is “not printing money” when it is churning $75 billion a month out of thin air.  It took a comedy show to point out the best person to refute this BS was the Fed Chairman himself from an earlier “60 Minutes” interview.   To CBS I say, “Have you no sense of decency, sir?” If this doesn’t shame them, then nothing will.  Please watch, and keep in mind if the lie and cover-up is this blatant, then we must be headed for big trouble in the economy soon.  (You can open the video fully by clicking the button in the lower right hand corner of the screen.)

The second video is called “New Rules: You and the IRS this January.”  It is from the Activistpost.com.  The video is about how the government wants to collect more taxes from small business.  It wants to accomplish this by forcing new tax reporting for any transaction more than $600.  This video is well done and should be frightening to any red blooded American.  Is this the “Change” we can believe in?  This new law could start the biggest black market in American history, but no matter what, it is an attack on privacy and freedom.  Please watch this video: