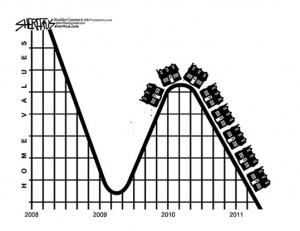 New data just released revealed delinquency rates for mortgage holders is up in the last quarter of 2011.  Now, the national mortgage delinquency rate is 6.01%, up from 5.88% in the third quarter of 2011 according to TransUnion.  This downward trend in real estate prices will not be slowed by this bad news.  Also, keep in mind, because of the $26 billion foreclosure fraud deal just agreed to (that lets the biggest banks off the hook for forgery and perjury), the banks are only going to be empowered to spike the pace of foreclosures in 2012.   This is all negative for prices in a market where nearly half of all homes in America (11 million) are worth less than the mortgage.  More mortgage delinquencies plus more foreclosures will equal more bank owned inventory, and when you have a lot of something, the price goes down.  It is a law of economics not even the Federal Reserve can defeat.

We have not seen the end of the trend of negative equity in real estate.  I would not be surprised to see more than 60% of residential real estate become underwater in the next year or so.  When the Fed stops suppressing mortgage interest rates (as it has been doing for the last few years, currently at or below 4% for a 30-year loan), what will happen to prices?  You have to ask yourself, how many more people will just throw in the towel and stop making mortgage payments for a losing investment?  My bet is the banks won’t even have to go through the grueling foreclosure process where they have to commit forgery and perjury.  The big banks will just be getting a lot more “jingle mail” in the form of house keys from defaulting borrowers.

It seems no matter how bad the news is, it is spun to be positive for the so-called “recovery.”  The Washington Post reported today, “We were hoping for better, because delinquencies remain very high,” said Tim Martin, group vice president of U.S. Housing in TransUnion’s financial services business unit. Prior to the housing bust, the mortgage delinquency rate typically hovered around 2 percent.”  Here comes the positive spin to awful news.  The Post story goes on to say, “He added that while the increase was not good news, the year-over-year decline is encouraging, and points to a continued, if slow, recovery in the housing market.”  (Click here to read the complete Wa Po story.)  (Click here and here for other versions of the same story.)  You have to be kidding me!!  Mr. Martin is certainly kidding himself that there is any kind of recovery in housing.

The mainstream media (MSM) just cannot let go of the “recovery” theme.  Yes, some markets have had declines in mortgage delinquency rates, but they are in markets that have already taken bigger than average price declines in real estate because of the ongoing crisis.  In those markets, the delinquency rates are still very high compared to the national average.  This is a real estate collapse in slow motion that has been slowed down by ultra cheap rates and the Fed buying trillions of dollars in toxic mortgage debt.  My only question is when will we see it all speed up to real time?