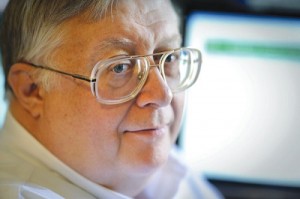 Economist John Williams says a recession isn’t on the way–it’s already here. Williams explains, “There are a number of factors here that are showing recession. Number one is industrial production. You can’t ignore industrial production; it is usually used with retail sales in timing formal recessions. It turned down last December, and it generally has not looked up since. You’ve had three out of four quarters in the last year contracting. The numbers that came out for the fourth quarter showed year to year contractions that you never see outside of recessions. This is typical of a formal recession. You are also seeing recession if you look at the housing numbers. They have turned down quarter to quarter for the fourth quarter . . . with housing starts. If you look at the stock market and the S&P 500, the revenues that are being reported for companies . . . revenues for the S&P 500 are falling off quarter to quarter. You never see that outside of a recession. That is a broad measure of economic activity. . . .The Atlanta Fed . . . their GDP number for the fourth quarter has just dropped to .6%. . . . I think it will be negative in the second reporting. With all these factors coming together, I think you will have an early call on a new recession or at least it will be viewed as a new recession in the early part of this new year.”

Williams says the main thrust of the Federal Reserve has been to prop up troubled banks that are still in trouble. Williams says, “There is very little the Fed can do now to help the economy. Actually, raising interest rates helps some because they can build a little more profit margin in their lending. . . .But if they run into trouble, if the banking system runs into trouble, they are going to do everything they have to do to keep the system from collapsing. They are going to be providing more liquidity and, if anything, they are going to be lowering interest rates. Along with that, you should see some reversal in the tremendous strength you have been seeing in the dollar. That will start to unwind all the craziness in markets like gold and silver and oil. . . . The reason why you have strength in the dollar is there is expectation here that interest rates are still going higher. The global economy, the global financial system is in enough trouble that the central banks, including in the United States, are going to go back into some sort of salvage operation, which will not mean higher rates in the United States. That will mean a reversal in the dollar’s strength. That is the primary prop behind the dollar, that and the expectation that the U.S. economy is booming along. I can tell you the economy is not booming along.”

Williams says that the Fed is still dealing with the fallout of the 2008 financial meltdown. Williams says, “They are still fighting the instabilities of 2008 that has not played itself out. When it does, they are going to be flooding the system with liquidity. It’s either that or they let the system fail. They decided in 2008 not to let the system fail. As they flood the system with liquidity, you will see weakness in the dollar. You will see a return of inflation domestically. You will see all sorts of other factors rallying such as traditional inflation hedges of gold and silver. If the dollar takes a significant hit, which I expect it will, that also will put upside pressure on oil prices. They did virtually nothing and did not address the things that led to the panic . . . now the economy is turning down anew.”

Join Greg Hunter as he goes one on one with economist John Williams, founder of ShadowStats.com.

There is free information on ShadowStats.com. You can also buy regular analysis from Williams. To become a subscriber click here.