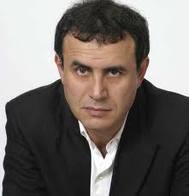 They call NYU economics professor Nouriel Roubini–“Doctor Doom.”   He got the moniker because his ominous predictions, a few years back, came true.  I really hate the “Doom” name.  I think he should be called “Doctor Right on the Money.”   So, when Roubini talks I listen.   It seems the spotlight is off the U.S. for the moment because of Greek debt and rumors of default.

But Roubini says Greece is just the “tip of the iceberg” in the world of sovereign debt problems.  Here’s more from Reuters:  Professor Roubini, the New York-based academic who was one of the few to anticipate the scale of the financial crisis, told a panel in California that the buildup of debt is likely to lead to countries defaulting or resorting to inflation to ease the burden on their populations.  “While today markets are worried about Greece, Greece is just the tip of the iceberg,” Roubini told the Milken Institute Global Conference in Beverly Hills, California. “The thing I worry about is the buildup of sovereign debt.”  Although Greece’s misreporting of the scale of its own debt has helped shatter investors’ faith, the southern European country is not alone in its struggle. The depth of the property bust in both Spain and Portugal has prompted the ratings agency Standard & Poor’s to downgrade the creditworthiness of both.  (Click here for the complete Reuters story.)

Roubini had some strong words to say about Greece and its debt problem.  The professor was a little more positive about the U.S. in the near term.  The long term for America is a different story altogether.  Famed investor Jim Sinclair(jsmineset.com) agrees with Roubini, but his view of the American debt problem is much rougher!  Sinclair said earlier this week, “Let’s cut the crap. The US deficit is 10.3% of GDP. If the US was part of the EU there would be a call for them to be thrown out, just like Greece.  Regardless, the rating agencies and media plow on with the public following them like the sheeples they are.”

Below is a Bloomberg interview with Dr. Roubini that illuminates the Greek and U.S. debt problems: