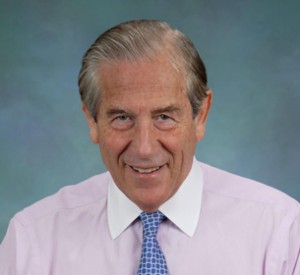 Financial and geo-political expert John Browne was an advisor on Russia to Prime Minister Margaret Thatcher.  So, does he think the war in Ukraine is a dire threat?  Browne says, “Oh yes, I think it is dire particularly because President Obama has had the wrong end of the stick, and he follows a strategic mistake.  When President Reagan and Secretary of State Gorbachev, with the assistance of Margret Thatcher, achieved an end to the cold war, in other words, the colder part of Second World War in the mid 1980’s, it was agreed, if not in writing but tacitly, that neither side would try to poach on the old buffer states of NATO and the Warsaw Pact.  From the Russian point of view, they see a number of countries have voted quite democratically, like Poland, to go into the European Union and be associated with NATO and things like that.  They have also seen activity by the secret services of the West, most notably the CIA in the Ukraine, to persuade them to go.  This has angered the Russians, and when you come to the Ukraine and Crimea, you are treading on vital interests of Russia.  It is very similar to the situation in October of 1962, when Khrushchev of the Soviet Union decided to put intercontinental ballistic missiles in Cuba, right in the soft underbelly of the United States, threatening the vital interests of the United States.  In that confrontation, President Kennedy had to win even if it meant nuclear war.  He had to win that battle.  In this case, we have the West interfering in the soft underbelly of Russia, notably the Ukraine and in Crimea.  This threatens the vital interest of Russia like a warm water port with access to the Eastern Mediterranean, which they have sought for 200 years.  Putin, who enjoys 80 percent domestic support, has to win even if it means going to war.”

On this turning into a nuclear war in Ukraine, Browne goes on to say, “This would have a very high risk of slipping into nuclear war.  Russia has enormous ground forces, and Putin has updated the Russian armed forces tremendously.  They have very sophisticated rocket weapons, and if we saw massive numbers of our troops being slaughtered, maybe we would be the first to press the nuclear button. . . . So, this is a desperate situation.”

On the Greece bailout crisis, Browne says, “Germany has exerted its force.  Basically, they have a four month reprieve, but even the funds that will come in on Tuesday of this week, they are going to have monitoring which the Greeks have accepted.  They said they would never accept monitoring, and they have accepted monitoring and have accepted conditions.  These are steps for Germany gradually turning the knot on Greece and getting them to heal. . . . This is the reality of real politics of major nations. . . . I think Germany has won. . . . How is the new Prime Minister of Greece going to sell this to the electorate who just voted him to do absolutely no corroboration with the West at all?”

On the U.S. economy, Browne says, “I think things are slipping because we have leadership of an appalling bad quality. . . . At the moment, we have massive injections of money . . . The total is $50 trillion of money that has been created out of nowhere.  It is so-called ‘click money’ where it is no longer printed, but clicked on a computer.  So, there is lots of money swirling around, but value is being eroded.  It’s giving us the pretense, the wonderful feeling that this is a great party.  The band is fantastic, but if reality dawns and someone switches the lights on and the musical instruments go dark, what could go wrong?  Reality sets in.”

After the Interview:
John Browne is also a published author.  His latest book “Hidden Account of the Romanovs” is about “The causes of WWI; the true nature of Grenadier trench life with actions involving The Prince of Wales, Winston Churchill, and Christmas 1914; combat flying with 56 Squadron, Royal Flying Corps’; the imprisonment and murder of the Imperial family . . .”  You can buy the book by clicking here.