Home
»
Political Analysis
»
Obama or More of the Same 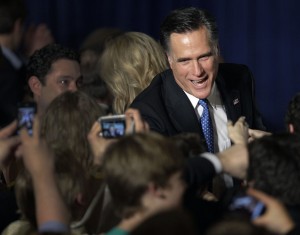 Mitt Romney, who finished first in New Hampshire last night, got a raw deal from the mainstream media (MSM) and his Republican opponents about a comment that was totally taken out of context.  It was reported that Mitt Romney said, “I like to fire people.”  That would make you think he was some sort of cold hearted person who doesn’t care about people.  What Romney actually said was in the context of health care providers and being able to fire companies who give you bad service.  Romney actually said, “I like to be able to fire people who provide services to me.”  (Click here to hear Romney for yourself.)  I agree with Romney on this one.  This was a totally false representation of what Governor Romney said, and everyone who carried this story and used this in a campaign should be ashamed.

Yesterday, FOX News came to Romney’s defense and rightly so.  FOX gave wall-to-wall coverage defending this injustice, but the “Fair and balanced” network does not apply its righteousness evenly.  What about Congressman Ron Paul?  Many on the MSM and FOX have ignored the presidential candidate.  Some on FOX, such as Judge Andrew Napolitano, have given the Congressman a fair shake, but many have not.  Where was FOX when The CBS “Early Show” left out Ron Paul in a poll done by Suffolk University right after the Iowa Caucuses?   Chief Political Correspondent Jan Crawford said, “A new Suffolk University poll shows him (Romney) with a commanding lead in New Hampshire at almost 30 points above his rivals.”  (Click here and see this biased report from CBS.)

CBS should fire Crawford, the network’s “Chief Political Correspondent,” for two reasons.  Reason one, for being politically biased in leaving Dr. Paul out of her story even though he held second place in the Suffolk University poll!  The second reason CBS should fire Crawford is because she is an idiot who can’t do second grade math.   The poll totaled only 65% without Paul.  If you are going to do someone in, at least be clever, but I digress.  Why aren’t the people at FOX defending Paul, a Republican?  I think it is because many on that network do not want him to get the GOP nomination.   FOX News made a lot of time to talk to Rick Perry, who finished dead last, but Congressman Paul, who finished a respectable second, got about a minute at around 11:20pm and then was talked about a little more after that.  “Fair and balanced”?  FOX should retire that slogan.  If you are a news organization, you cannot be “Fair and balanced” to only the people you like.

I don’t think either party wants Paul to be the GOP candidate.  Republican and Democratic special interests know both will take a hit under a President Paul.  Republicans, like Romney, will not rein in the banks, stop the ongoing bailouts or truly clean up the kleptocracy we call a financial system.  Obama surely won’t either because he said to reporter Steve Kroft, last December, on “60 Minutes, “I can tell you, just from 40,000 feet, that some of the most damaging behavior on Wall Street, in some cases, some of the least ethical behavior on Wall Street, wasn’t illegal.”  Kroft didn’t bother to challenge the President, even though he did an expose’ on widespread and systemic mortgage fraud earlier last year.  (Click here for more of this disgusting story.)

I think Romney will end up the GOP nominee, but I have serious doubts he can defeat Obama and his nearly $1billion war chest.  It will also take more than money to replace the President.  Romney’s main strength is corporate America and its “Super PACs.”  Paul probably would have a better chance of winning.  Paul gets about 50% of the youth vote.  It’s hard for the GOP to comprehend that young people respect Paul, and he’s 76 years old!   I think it is also safe to say that liberal Democrats will not vote for Romney, but Paul on the other hand, would take some votes away from the President’s base.  I mean, let’s face it, a candidate that wants less war and less of the Federal Reserve will appeal to liberals disillusioned with Obama.  Also, consider the “Indefinite Detention” bill the President just signed into law on New Year’s Eve.   The ACLU says this legislation guts the Constitution, and you just can’t get more liberal than these folks.  The left is not happy with Obama’s unyielding support for Wall Street which is a big campaign donor.  Wall Street knows how to rig the game and contributes just as much to the Republicans.  Mitt Romney is their GOP poster boy.  So, if Romney gets the Republican nomination, and it’s not over just yet, the choice will be Obama and more of the same.