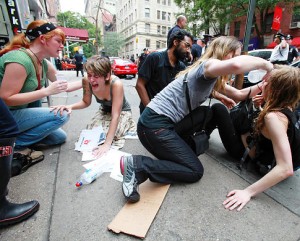 You got to wonder what kind of country we are living in when people protesting Wall Street greed and corruption are pepper sprayed.  Meanwhile, the crooks that caused a global meltdown sit and look out their plush offices and collect fat bonuses.  You wonder why people are protesting?  How about the fact that not a single high-ranking Wall Street banker has gone to jail over this calamity, let alone been investigated.  According to Professor of Economics and Law, William Black, around a thousand financial elites were successfully prosecuted in the wake of the Savings and Loan scandal of the late 1980’s.  How many elites have gone to jail this time—zero!!  (Click here to read more from Professor Black.)  Former Countrywide CEO Angelo Mozilo paid a $67 million fine, but that is not exactly a big deal for a guy that ripped-off millions from the system.  The 2008 meltdown is maybe 100 times larger than what happened 20 years ago.

Fast forward to earlier this week and what is being called the “Occupy Wall Street” protest.  Protesters were being pepper sprayed by the NYPD.  The New York Times is reporting an investigation is underway to see if it was warranted.  Yesterday, the NYT said, “The police and Manhattan prosecutors are separately examining a high-ranking officer’s use of pepper spray on a number of female protesters at a demonstration on Saturday.     (Click here for the complete NYT story.)

The officer “restored order” by spraying some girls (one in a skirt) that were protesting?  I am not one to go against the police, but they got to follow the rules too.  Check out this video, and see if you think spraying the girls you see in the photo above was justified: