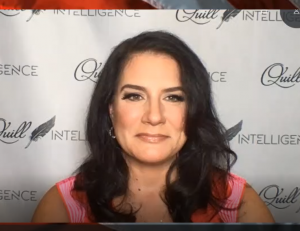 Former Fed insider Danielle DiMartino Booth is not a fan of the Federal Reserve, especially now, with its massive money printing campaign.   DiMartino Booth thinks “the damage to the economy is permanent” and that’s not the only thing here to stay.  DiMartino explains, “We are seeing permanent inflation increasing, and we have seen another uptick in initial jobless claims.  This is not the data you want to see if companies want to have pricing power. . . . We do have inflation where it is not measured, and that is in asset prices and housing prices.”

Di Martino Booth says the Fed will do everything possible to keep the money printing going.  DiMartino Booth contends, “Anything they can do to keep the printing presses running, any cover they can try and create, any type of narrative they can try and paint that allows them justification to go from a $4.5 trillion balance sheet to a $7 trillion balance sheet. . . . The Fed is looking for cover to continue its constant quantitative easing (money printing) campaign.  If it says it is going to let inflation run hot, it has that cover it is looking for.  It is always about lower for longer.  It is always about keeping the printing press running 24/7.”

DiMartino Booth says don’t take the stock market highs at face value because if you look deeper, things are not that good.  DiMartino Booth says, “The concentration of the seven largest stocks is now $8 trillion.  That is larger than most countries, by the way.  Without them, the S&P 500, the broadest benchmark stock index in the country, would be . . . a down year in the stock market.”

On the other hand, DiMartino Booth says the bailouts mostly benefited Wall Street and not Main Street.  DiMartino Boot explains, “This is the haves and have nots of credit.  If you are a small or midsize company, good luck.  It’s very difficult to find credit.  If you are the biggest companies . . . you don’t even have to have profits.  You can just get as much money as you want to keep going.  So, it is as bifurcated as it comes. . . . There has not been as much discussion as needed about the monetary policy at the Federal Reserve that has done a bang-up job of keeping the largest companies going while we have watched a lot of Mom and Pops, that . . . just needed a liquidity bridge, go by the wayside.  This has been a tremendous fiscal and monetary failing.”

DiMartino Booth also warns, “As long as you have this type of damage and business travel being eviscerated, you are going to see permanent damage to the economy.  You will see entire hotel chains close down, and those jobs be lost for good in many cases.”

On unemployment in America, Di Martino Booth predicts, “at least 25% of these job loses will be permanent in nature stretching out through 2021. . . . I think there will be permanent damage to the housing market too . . . . Now, what we are seeing are evictions.”

Why are gold and silver prices taking off in the past few months?  DiMartino Booth says, “The reason you have seen as much interest as you have in gold comes down to something very simple.  We are in a speculative ball right now.  Whether you are talking about junk bonds or the stock market, everything has gone completely haywire. . . . When the peanut butter hits the fan, gold is the one place where investors can find the protection they need. . . . As long as there is anxiety and disruption potential, that is what makes gold the perfect hedge whether you see deflation or inflation further out on the horizon.”

DiMartino Booth founded Quillintelligence.com. There is some free information there. She also offers a subscription service for original cutting edge analysis called “The Daily Feather” and the “Weekly Quill.”  To become a subscriber click here.

There is also some free information and articles on DiMartinoBooth.com.