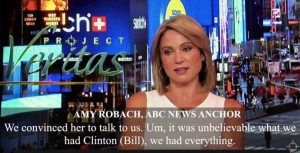 James O’Keefe and Project Veritas have released video featuring ABC investigative reporter Amy Robach visibly upset about the decision to “spike” her tell-all report about Jeffrey Epstein ‘s child trafficking.  These damning revelations, at very least, irreparably damaged the ABC/Disney brand; Disney from the standpoint that they pride themselves on being kid friendly creators of content and ABC being the poster child of irresponsible news coverage. ABC’s spiking of the Epstein story for three years surely led to the unnecessary, hideous abuse of additional hundreds of underaged girls.

These revelations hopefully serve as the proverbial wooden stake through the heart of this vampire news/entertainment conglomerate.  Rob Kirby interviews respected ex-ABC newsman Greg Hunter to get his insight on the process of developing investigative news stories and debunk the notion of ABC claims that the gathered material in the Epstein story did not meet their editorial standards.  Just in today, we’ve learned who the ex-ABC employee is who leaked the Amy Robach rant.  Apparently, the Project Veritas “leaker” had left ABC to work for CBS.  ABC figured out her identity and passed the name of the informant on to CBS – who promptly fired her this morning.  Sadly, it appears that the journalistic standards at CBS are no better [read: absent] than those of ABC.  Hopefully, there’s a wooden stake out there somewhere with CBS written on it too.  Kirby felt it was important that the USAWatchdog.com audience hear from a guy who has been there and has the T-shirt where ABC News is concerned.

Rob Kirby is an expert in gold, silver and all aspects of derivatives and bonds.  Mr. Kirby is also the founder of KirbyAnalytics.com that delivers “Proprietary Macro Economic research” to his clients.