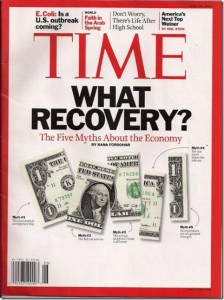 There is a lot to cover in the Weekly Real News Wrap-up this week.  First off, Greek debt problems look like they are going to get ugly, and this could spell problems for Europe and the world.  Looks like Greece will default, we just don’t know how bad it will be.  Bill Gross says the U.S. is in worse shape!  There is a showdown between Congress and the White House over Libya.  Congress wants oversight and the President says it is not necessary.  There was a big defeat for the bankers in the foreclosure world.  It also looks like the mainstream media is finally catching on that the economy is really bad.  The cover of Time Magazine is the latest of the MSM to finally tell you there is NO RECOVERY.  The reason?  Nothing has been fixed!  Finally, Congressman Weiner has resigned–thank goodness it is finally over.  Please enjoy this week’s installment of the Weekly News Wrap-up!