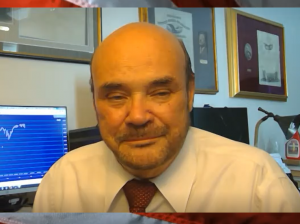 Legendary financial and geopolitical cycle analyst Martin Armstrong says now that the stolen election is over, get ready for lawlessness to reign.  We start with the Supreme Court that refused to hear the Trump case on Pennsylvania voting fraud.  There are three more 2020 Election voter fraud cases pending at the nation’s highest court.  Armstrong says, “I don’t think they are going to take any of them.  Look, the rule of law has absolutely collapsed in the United States.  It’s just a joke at this point. . . . You swear an oath to uphold the Constitution.  It’s not whenever you feel like it. . . . This is not only a denial of due process but the civil rights of everybody in the country.  They effectively said Pennsylvania changed the rules against the (state) legislature in the middle of an election, and we are not going to hear the case.  So, they are effectively saying politicians can change the rules of an election at any time, and it doesn’t have to be constitutional.  Refusing to take this case is a disaster because next election they can choose to do the same thing at any time.”

Armstrong says the trend he is seeing is anti-establishment.  Armstrong explains, “This is part of a trend coming into our model until the end of 2032.  This trend is an anti-establishment trend.  We’re fed up with politicians and corruption.  The Supreme Court is an example.  Forget it.  The Constitution is discretionary now?  That’s what they are really saying.  It has no validity anymore.  The mainstream press says that Trump is the person who led this, and he’s not.  He just happened to be the guy at the right time at the right place.  This trend has been going on for quite some time, and it’s only going to get worse.”

Armstrong is a financial consultant to top government officials around the world.  He has inside information.  So, listen up how Bitcoin plays into the globalist plan for digital money.  Armstrong warns, “They effectively want to eliminate paper money totally, and this is part of the scheme.  The danger of Bitcoin that people don’t understand is the government is not going to allow competition.  When it really gets to the point where they have to do something, they will just seize all the crypto currencies and give you an exchange rate swap, and they will be the ones who decide the price.  Then, you will get the government digital currency.”

Martin Armstrong thinks that Joe Biden and other world leaders are stepping into the same high inflation trap as Jimmy Carter.  Armstrong says, “They are raising toll prices and taxes because their revenues have declined.  This is the mismanagement of government on steroids.  You have destroyed your economy and raised taxes so you can keep it the way it is, but you never reduced your expenses.  It’s totally insane.  They have destroyed New York City. . . . This is why the stock market is going up, collectables are going up, coins, stamps and even comic books are all going up.  It’s sort of like the German hyperinflation. . . . Once the government started confiscating people’s money . . . they started buying everything they could with the cash, and that turned into this hyperinflation.  They were buying anything tangible:  art, land, you name it.  That is what this is all about now.  Going into 2024, we are looking at a wave of inflation which will be in equities and commodities, but we are also looking at shortages, particularly in agriculture and going all the way up.”

In short, Armstrong says, “Expect inflation.”  (There is much, much more in the video interview below.)

Join Greg Hunter of USAWatchdog.com as he goes One-on-One in this in-depth interview (50 mins. in length) with Martin Armstrong of ArmstrongEconomics.com.

Martin Armstrong still says he likes gold but is more bullish on physical silver.  Silver will probably not be confiscated by the government, and it is also not tracked by government, at least for the time being.