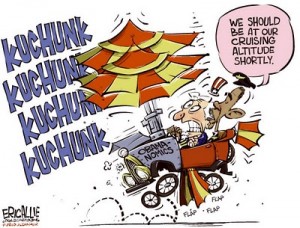 The following article was written by James Howard Kunstler.  Mr Kunstler wrote a book in 2008 about post-oil America called  “World Made By Hand.”  Fossil fuel and issues surrounding it are a natural fit for this writer.    He wrote the article in early August when President Obama was touting General Motor’s new electric car.   –Greg Hunter–

This economy has a destination for sure, but it’s not in the direction where all eyes are trained in moist hopefulness: that glimmering horizon of longed-for growth. You will not get that kind of growth — the kind that increases the overall wealth of the organism in question. A few people will make more money than they did before, but overall we are in an epic contraction. More people and organizations will go broke than will thrive. It will seem very unfair.

The true destination of the US economy is to get smaller and for two reasons mainly: 1.) Capital (“money”) is vanishing out of our system steadily and rapidly due to a massive collective failure to repay money owed on loans, mortgages, debts, and assorted obligations. 2.) Access to the primary resource we depend on for powering the economy (oil) is increasingly beyond our control — even worse, under the control of people who would like us to eat shit and die.

We really have a choice between two ways of dealing with this. We can downsize and re-scale consciously and coherently, or we can continue to chase after the phantom of growth and allow the nation to fall into a shambles of desperation. So far into this long emergency of an economic fiasco, we seem to have chosen the pursuit of a phantom. That’s what President Obama was doing (the last week in July) in Detroit, shilling for a new electric automobile which, he said, will make us “energy independent.” If  Mr. Obama believes this, then it isn’t a very good advertisement for an Ivy League education.

I’d like to know how many Americans believe that electric cars run on virtually free energy (but I don’t have pollsters on my payroll). I’d bet a lot of them do, including President Obama. Sorry to rain on this uplifting parade. At best, such a car fleet would run on coal — that is coal-fired electric power plants — but even that is a ridiculous fantasy when you actually pencil-out the details. Not to mention that a nation full of people with dwindling or vanishing incomes won’t be in a position to fork over forty-grand for one of those new pseudo “green” vehicles. Also not to mention — wait for it — that due to rapidly vanishing capital there will be far fewer car loans available. The only thing growing in this part of the picture is the number of Americans who cannot possibly qualify for a car loan under normal terms that would require regular repayment of interest-and-principal. (Plenty of Americans qualify for the new “innovative” kind of loan — the kind that you never have to make payments on, but for the moment, the banks are choking to death on them, so additional approvals may lag for a time.)

It’s instructive that so much current hoopla about economic growth revolves around the issue of cars. For, if anything, reality is telling us very clearly that the mass motoring paradigm is near its end. Our determination to prop it up at all costs, despite the grave impairments of available capital and energy resources is a symptom of our detachment from reality. It’s also a fine illustration of the psychology of previous investment, which prompts a desperate society to squander its scarce remaining resources on the very things that are putting it out of business.

We don’t need need more highways. We’re about to find out that we don’t have the money to keep up regular repairs on the highways we already have. The hundreds of millions of “stimulus” dollars that President Obama flung into “shovel-ready” highway projects was among the more tragically dumb mistakes he made early on, and he has apparently learned nothing  along these lines since then.

Interestingly, NPR ran a local story over the weekend — an obscure little item — saying that Amtrak was determined to raise the average speed of its passenger trains running north from Connecticut through Vermont from 40 miles-per-hour to 60mph. That would be some triumphant accomplishment!  It would bring us back to about an 1860 level of service. Of course, I happen to believe that we will be lucky in a few years if we are able to enjoy an 1860’s standard-of-living, so maybe this little side venture in public transport is perfectly in tune with America’s future.

Otherwise, these are just ominous days of drift in a place of stillness where the uncomplaining robot traders tirelessly work their magic in the server farms of Wall Street, while their putative “handlers” enjoy the dainty pleasures of the Hamptons — which seem to center these days on pounding back vast draughts of premium vodka in conjunction with Red Bull, cocaine, hydroponic ganja, Viagra, and Klonopin to round off all those edges. And let’s not forget the catered delicacies circulating on trays passed by super-models — the yellowtail tartare tidbits, the green olive pesto crescents, the firecracker shrimp canapés. I wonder if the nibblers ever stop to reflect on how many of the un-privileged “out there” get by lately on dog food and ketchup.

My timing is notoriously faulty, they say, but I can’t ignore the sensation of being seasick-on-dry-land that tells me something awful is at hand. President Obama appears more and more Gorbachev-like to me, a well-intentioned functionary sailing his ship-of-state steadily into a maelstrom. The course is set and ain’t nobody going to make a move to change it. Of course, Mr. Obama is no more to blame than Mr. Gorbachev was — if anything one can’t help but admire Gorby’s steering of the creaky old Soviet ghost ship into drydock with nary a pint of blood spilled in the process — but what’s really striking in America today is the massive failure of leadership in the layers below Mr. Obama, and in all the other sectors of American culture where CEOs, chairpersons-of-the-boards, deans and provosts, doctors of this and that, generals and attorneys-general, even diverse clergy in all their arresting head-gear cannot collectively advocate for reality.

This failure of credentialed and elected authorities will surely unleash the crazies as we skid toward fall. Legitimacy hates a vacuum. The absence of a reality-based consensus for action will invite a consensus based on other things such as the lust for vengeance, the labeling of scapegoats, patriotic gore, and all the alternate trappings of a politics-gone-mad. Enjoy the heat and the clam rolls wherever you are in the meantime, and when you come home don’t be surprised if you no longer recognize the country you’re in.

The sequel to Mr. Kunstler’s 2008 novel of post-oil America, World Made By Hand, is shipping to booksellers now.  Order via AMAZON.