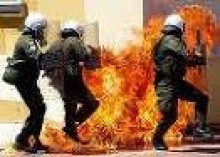 In the early days of coal mining, canaries acted as a warning that odorless poisonous gas was present.  If there was a dangerous gas build-up, the canary would be the first to keel over.  You can use the “canary in a coal mine” metaphor to describe the situation in today’s financial world.  Greece is the canary.  The poisonous gas is debt.  Greece has just keeled over, and the rest of the world is running scared.  That’s why the Dow was down 1,000 points at one time yesterday!  Oh yes, there was talk of “unregulated high frequency computerized trading” and “bad trades,” but make no mistake, the market is worried about massive amounts of sour debt at all levels around the globe.

In a nutshell, Greece borrowed way too much money, and does not want to drive old cars and eat rice and beans for years to pay it back.  That’s why you are seeing riots in Athens.  The problem with Greece is it cannot print money like the United States.  Its debts cannot be simply inflated away.  Bills have to be paid with big cuts to pensions and social programs, and it is not going over well.  That brings us to the other option, and that is to simply not pay the money back and default.

There is one other option, print money and bail out Greece.  Here’s how investment guru Monty Guild sums up the bailout scenario: “This is happening because if Europe does not support Greece, the government debt contagion that we have been discussing in recent memos will continue and spread. It will spread to Spain and Portugal and later to many countries in Europe including Italy and possibly France.  Because they fear the spreading contagion, Europe wants to stop the crisis as soon as possible.  In other words, Europe is getting a bailout, not just Greece.”  (Click here to read Guild’s full report.)

Greece isn’t the only country to have a bad debt problem, just the first to fall.  America will also need a bailout, and the Federal Reserve has been doing just that by printing more money than the world has ever seen.  This is why gold has been on a steady uptrend.  The smart money already sees the yellow metal as, well, money!

Economist Dr. Marc Faber appeared on Bloomberg yesterday to talk about the market plunge and said, “The governments are all bankrupt.  They can only survive by printing money (to pay debts), and they’ll print money and print money.  That’s why the price of gold went up today when everything else went down.”

Are the Greek people any different than anyone else in the world?  I think not.  Just look at what is going on in the United States.  Americans everywhere are protesting budget cuts.  Is America in the same shape that Greece is in?  You bet, according to Jim Rickards, an investment banking pro and risk management expert.  He said earlier this week on CNBC, “I’m having trouble finding a Greek metric where the U.S. isn’t as bad or worse than Greece or will be shortly.”  Rickards also said, “The dollar is pretty much at the end of the line.”  Listen to the entire interview by clicking below:

So what is it going to take to “fix” the debt mess the world finds itself in today?  Well, first of all, there really is no “fix” because the debt problem is just way, way too huge.  According to the Bank of International Settlements, the debt ball in the world today is $600 trillion.  I wrote about this financial phenomenon in a post last year called “Can The Financial System Really Be Fixed? Some Say No.”

This debt ball is made up of complicated financial instruments called derivatives.  There are plenty of these instruments in places like Greece and around the world.  These are private debt contracts between individual parties.  There is no public market for derivatives.  That means there are no rules, regulations or guarantees.  Without a public market, there is no way to objectively price this ball of financial crap.  Bob Moriarty of 321gold.com sums up the end game of this enormous mountain of debt this way, “. . . The derivatives market is going to go into a meltdown like nobody’s ever dreamed of because nobody but me and the other nine guys actually understand exactly what $600 trillion dollars is. It’s 10 times the size of the world economy, and it’s been blowing up since June 2007 when those Bears Stearns funds went under. . . . You talk about “if” we have financial collapse. I talk about “when” because no other alternative is possible. Nobody and nothing is going to stop it from happening. It is as absolute as the time and tides.”  (Click here for Moriarty’s complete interview)