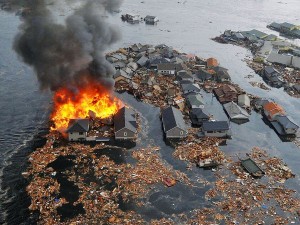 The news from Japan is grim.  At least 10,000 people are reported dead from the killer quake that rocked the island nation last week.  Likely, the death toll will go much higher in the coming days.  There have been at least 3,400 buildings destroyed by the flood of a 3 story tsunami, the 8.9 earth quake or by fire.  Oil refineries were damaged and shut down.  Roads and bridges were destroyed by the quake and the rail system was wiped out in some areas.  On top of all this, several nuclear reactors are badly damaged and one even exploded.

A Reuters story said yesterday, “A grim-faced Prime Minister Naoto Kan described the crisis as Japan’s worst since 1945, as officials confirmed that three nuclear reactors were at risk of overheating, raising fears of an uncontrolled radiation leak.  “The earthquake, tsunami and the nuclear incident have been the biggest crisis Japan has encountered in the 65 years since the end of World War II,” Kan told a news conference. . . . As he spoke, officials worked desperately to stop fuel rods in the damaged reactors from overheating. If they fail, the containers that house the core could melt, or even explode, releasing radioactive material into the atmosphere.” (Click here to read the complete Reuters story.) The question regarding containment of the damaged nuclear reactors in Japan is a big one.  And, assessment of lasting damage to the surrounding areas is also in question.

The 8.9 magnitude earthquake (now updated by officials to 9.0-9.1 quake) is the “Black Swan” of black swan events.  (A “Black Swan” event is something random and totally unpredictable.  This term was coined by Nassim Nicholas Taleb, a finance professor and former Wall Street trader.)    No one could have seen this enormous quake and its aftermath coming.  However, now that much of the damage is done, we can anticipate some of the economic aftershocks from Japan.

On the oil front, it looks like prices will go down because Japan will not be using as much oil in the near term.  The economy there is understandably grinding to a halt.  Rescue operations and humanitarian missions are in full swing.  Humanitarian needs of millions of people will continue for weeks and even months.  When things do settle down, construction companies will get work rebuilding Japan, but rebuilding is not the same as business expansion.   Rebuilding is just getting things back to where they were before the quake, but regardless, Japan will rebuild its cities, roads, refineries, rail system and infrastructure.  That will take money–and lots of it.

One way for Japan to get money is to sell some of its $882 billion in Treasury bonds, and that is just what happened last Friday.  The Wall Street Journal reported, “. . . Japanese investors sold U.S. government bonds to repatriate money home following the earthquake that hit that country. . . . Long-dated Treasurys were the biggest losers, reflecting concern that Japanese insurers may continue to sell such securities to pay insurance claims in the coming sessions. Such selling, however, was partly offset by buying from some investors seeking safety from the political turmoil in the Middle East and the euro-zone’s sovereign-debt woes.” (Click here to read the complete WSJ story.)

Japan is the second largest holder of U.S. debt.  If Japan keeps selling, expect QE3 to begin sooner than expected.  Other countries holding U.S. Treasuries may also sell if they fear an all-out U.S. bond rout.  That could send interest rates up and mortgage rates would follow.  There is another view reported by Reuters Friday, “The BOJ (Bank of Japan)is more likely to buy Treasuries to drive the exchange value of the yen down to stimulate the economy and help exports.”  Christian Cooper, head of U.S. dollar derivatives trading at Jefferies & Co in New York, said he expected any Japan-related sell-off to be limited.  “I believe we have reached a critical point where the disaster is so severe the BOJ will engineer liquidity mechanisms that will reduce the likelihood of forced selling in the Treasury market,” Cooper said. (Click here for the complete Reuters story.)

Even if Japan doesn’t sell a large chunk of Treasuries, it certainly will not be buying any in the future.  Knock out the number two largest buyer of U.S. debt, and that will surely put upward pressure on interest rates.   The Fed desperately wants interest rates to stay low so the U.S. economy will not jump off the tracks and plunge into depression.  If rates do rise, expect the Fed to turn up the printing presses to hold rates down and fuel more inflation.  This problem seems small compared to what the Japanese people are dealing with now.  Please pray for Japan.