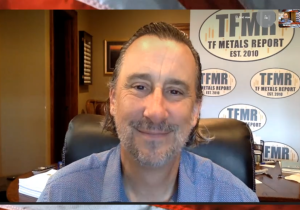 Financial writer, market analyst and precious metals expert Craig Hemke predicted at the beginning of 2022, “This is going to be a wild, unpredictable year.  It will be volatile.”  He’s been right, and, now, for the second act or second half of the year.  Today, Hemke says, “You can believe in magic or you can believe in math, and if you believe in math — buy gold.”

The math, according to Hemke, says the Fed is about to do an about-face and start money printing and cutting rates.  Please keep in mind, by every metric, the economy is tanking, and this is an election year where the Democrats in power are weaker than they have ever been.  Hemke says, “We are already in a recession, and that is a textbook definition.    People are hurting badly.  Everybody knows this. . . . What’s going to happen is the interest rate picture is going to get completely out of control, or what is most likely going to happen and that is the Fed is . . . going to put the pedal to the metal with QE (money printing) up to your eyeballs trying to rush to catch up with that train that is accelerating away from them.  Man, this is coming. . . . What keeps me going is the math, and that is the math.  This is going to happen, and it will be sometime soon. . . . That is when the flood gates open again, and investment demand for everything precious metal . . . the cash comes flowing into the sector and the price takes off.  Sometimes it will move up by 50% in five months as it has in the past.”

Hemke says inflation is the cause of the downfall of countries and the rise of tyrants and reads a passage from the book “When Money Dies.”   Hemke reads, “Inflation could produce the conditions where extremists of right and left could raise the mob against the state, set class against class, race against race, family against family, husband against wife, trade against trade, town against country.  It undermined national resolution simply when want or need might have bolstered it.  It causes fear and insecurity with those who have already known too much of both. . . . It prompted contempt for government and subversion of law.’  That was Germany in 1922.  How is that not the U.S. in 2022?  Amazing!! . . . We are preparing for the end of the debt-based system, and gold and silver are your lifeboat in the storm.”

There is much more in the 45 min interview.

Join Greg Hunter of USAWatchdog.com as he goes One-on-One with Craig Hemke of the popular website TFMetalsReport.com 7.12.22.

There is some free information on TFMetalsReport.com.

If you want to subscribe, use the promo code “Hunter” and get your first month half off.  This offer is for monthly subscriptions only.  (USAWatchdog.com lists this code for its viewers as a courtesy and gets no monetary compensation from TFMetalsReport.com.)