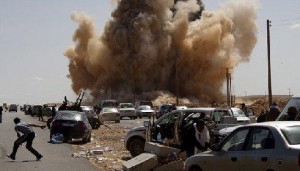 The President and his supporters are going to great lengths to make it appear the military operation in Libya is not a war.  Deputy national security adviser Ben Rhodes called the NATO bombing in Libya “kinetic military action,” but not war. President Obama is also going out of his way to send the message that this is not an American led operation.  A week ago, in a nation-wide address, Mr. Obama said he was handing over control to our European allies, “. . . because of this transition to a broader NATO based coalition the risks and cost of this operation to our military and American taxpayers will be reduced significantly.” I don’t see how Mr. Obama knows how much this will reduce the cost of this war if there is no clear plan or goal.

The Obama administration doesn’t even know who they are helping to unseat Gadhafi in the Libya War.  The President’s own former national security advisor, General Jim Jones, said yesterday, “We don’t know exactly who the opposition is.” General Jones appeared on ABC’s “This Week” with Christiane Amanpour.  She said, “The United States is making a great fanfare about now giving over to NATO, but you are a former NATO commander.  NATO for all intents and purposes is an American organization.  It’s run by an American commander, the chain of command is American, the biggest command and control and resources are American.  This is still an American led operation, right?” And sticking to the Obama administration script, General Jones replied, “I’m not sure I agree with that. . . in the sorties that are being flown now . . . it’s roughly 50/50 and it’s going to go down to where the Americans are going to be supporting and reconnaissance, search and rescue, intelligence and refueling and things like that.” (Click here to see the complete ABC Amanpour interview.)

While General Jones was making his rounds on the Sunday political talk shows, NATO was asking for more bombing missions from the U.S. military.  ABC News reported yesterday,   “Lack of U.S. Strikes Blamed for Rebel Losses.” The report also said, “A number of U.S. combat forces had been scheduled cease operations today, including U.S. Navy destroyers and submarines that have been launching Tomahawk cruise missiles from the Mediterranean.  Military experts said that America’s reduced rolein enforcing the Libyan no-fly zone could cripple efforts to keep Gadhafi’s forces from battering the rag-tag army trying to topple him.” (Click here to read the complete ABC News story.)

So, what started out as a humanitarian mission to stop a massacre is now a mission to “topple” Gadhafi?   Once again, a U.S. military mission starts out as one thing, and ends up being something else.  In an appearance on CNN yesterday, Jones said, “The problem is that while everybody wants to see Gadhafi leave, either be removed or leave on his own, that end state is not yet clear,” Jones said Sunday on CNN’s “State of the Union.” “Unfortunately most people want perfect clarity in a situation where clarity doesn’t really exist yet.”  (Click here to read the complete CNN story.)

Is clarity too much to ask for when American lives are at risk and tax dollars spent with no end in sight?  Simple questions should be answered before you go to war:  What exactly is the plan?  How much will this cost?  What is the exit strategy?  I don’t see how the U.S. military plays a “supporting” role when the President has said repeatedly that “Gadhafi needs to go.” No matter what spin the current administration puts on this, America is now entangled in a third war. American leadership and firepower will be required to accomplish the goal of removing Gadhafi from power.  How is “reconnaissance, search and rescue, intelligence and refueling” going to kick a dictator out who’s been in power more than 40 years?  I’ll tell you the simple answer–It’s not!