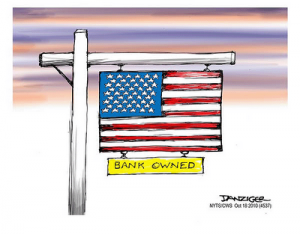 Did you know that in the aftermath of the Savings and Loan (Thrifts) scandal there were more than a thousand felony convictions of financial elites?  The cost of the wrongdoing associated with the rip-off and closure of nearly 800 Thrifts cost taxpayers more than $160 billion.  The current sub-prime/mortgage-backed security scandal is 40 times bigger according to Economics professor William Black.  That means the size of the crime is $6.4 trillion by my calculation.  Can you guess how many indictments there have been on financial elites who created this enormous mortgage crisismess?  Zero, none, nada, zip.  Yes, not one single prosecution or conviction has been started of achieved.

It appears to me the entire mortgage/securitization industry is one giant criminal enterprise.  And yet, last Wednesday, Housing and Urban Development Secretary Shaun Donovan said, “We have not found any evidence at this point of systemic issues in the underlying legal or other documents that have been reviewed.” What!  Well, look a little harder Mr. HUD Secretary.  (Click here for the complete Reuters story with Donovan’s quote.) Donovan did say the foreclosure fiasco is “shameful,” but that is not the same as a criminal prosecution now is it?  Where is U.S. Attorney General Eric Holder in all of this?  I guess he’s busy planning a lawsuit to stop California from making pot smoking a misdemeanor.  Holder is probably also very busy with continuing legal actions against Arizona’s immigration law.  I guess trillions of dollars in mortgage and securities fraud is just not enough of a legal priority for America!

All 50 State Attorneys General are looking into what is now being called “Foreclosuregate.”  Iowa AG, Tom Miller, is leading the investigation for the 50 states.  His focus, according to a recent Washington Post story, is “preventable foreclosures“–ones in which small changes might keep the homeowners in their home – benefits all parties involved. The borrower keeps the house. The servicer continues to collect fees, and the investors receive more income than a foreclosure would bring. The community has one less deserted home.” Miller’s office also says, “This is a public policy issue.” (Click here to see the complete Wa Po story.)

When did State AG’s become public policy negotiators for the banks?  Where are the criminal prosecutions?  This is a sham and an outrage perpetrated by state governments.  Who are they protecting?  I say it’s really the banks’ and investors’ income stream.

It sure doesn’t look like the FBI is going to prosecute any of the “rampant” mortgage fraud any time soon, according to Professor Black.  At the end of September on the Dylan Ratigan Show, he said, “We know that the FBI has formed what it calls a partnership with the Mortgage Bankers Association.  Now, that’s a trade association of the perps, and guess what the trade association said: ‘Hey we’re the victims.  You know none of the bad stuff happened because the lenders wanted to engage in this fraud,’ and the FBI believed them if you can believe that!”

Black is not just some angry academic.  Besides being a Professor of Economics at the University of Missouri KC, he is also a former bank regulator and an expert in crimes committed by CEO’s.  He thinks Treasury Secretary Tim Geithner and Attorney General Eric Holder should be fired so real regulators can get to work on prosecutions of crime throughout the entire industry.  And get this, just last week, Black adamantly claimed that “major frauds continue,” at all the big banks.  Hear for yourself in the clip below

Again, Black said, “80% of the loans were fraudulent.” He also said in this segment (but wasn’t included in the clip) that, “securitized mortgage instruments are all fraudulent.” That means trillions of dollars in MBS’s are worthless!  Foreclosuregate is a gargantuan financial mess, and federal and state regulators have not found a single crime in all of this to prosecute?  Clearly, the U.S. government and both political parties are shielding the perpetrators.  Oh wait!  The SEC did fine Angelo Mozilo, the former head of Countrywide Financial Corp., $67.5 million in penalties to settle civil fraud and insider-trading charges.  Mozilo ripped-off hundreds of millions of dollars, and he pays a fine that amounts to a parking ticket for a man of his wealth?   Is that the same as a criminal prosecution?  I don’t think so!!  (Click here for more on the Mozilo story from The WSJ.)

So, if you are or have been committing document, tax, security, rating or foreclosure fraud, you don’t have a thing to worry about.  Keep doing what you’ve been doing because you are committing “the perfect no prosecution crime.” According to the financial elites, these crimes are essential to keep the American economy running smoothly.