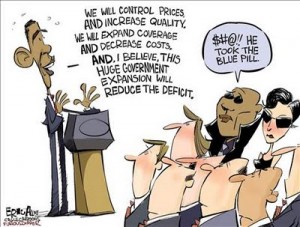 The following article was written by James Howard Kunstler,  I thought this would be a nice follow to Monday’s post “When Will Financial Armageddon Begin?” My take on this excellent piece–big changes are baked into the cake already.   The US economic crisis is real!

He also seems to agree with me, that bad things are going to start happening sooner than later when it comes to the economy.  Also, there is going to be significant political change coming as well.

Kunstler is a strong bright voice, and what he says should bring your world into better focus.  Enjoy the article — I did.  –Greg Hunter–

A scarlet tinge colors the Virginia creeper, the Canada geese grow restless out on the fairways, an ominous canapé fatigue spreads through the Hamptons, and cyclonic weather blobs march west across the Atlantic – you know that time of the year has arrived. Fall approaches on busy feet. The name itself suggests slippage. Though many government numbers lie, a dark reality still penetrates the fog of econometrics. Visions of tumbling indexes wither the spinal fluxes of nervous day traders praying to their little effigies of Jim Cramer that it’s all just in their heads. Sometimes it seems as though the universe itself grows tired of suspense and yields to the zeitgeist. A cosmic groan fills the air from sea to shining sea as all eyes turn skyward. Was that the sound of the economy rolling over?

Peak pretending now joins peak oil, peak credit, peak rare earths, and all the other peaks visible to us humble valley dwellers. Pretending bought America two years of respite from the ravages of fraud and mismanagement, but now the true condition of this society reveals itself like the disfigured ghoul in the sewer lowering his mask. Further pretending is unnecessary now. We’re even beyond the “modified limited hang-out” stance, as a long-ago presidential counselor once put his PR strategy in the face of crumbling public credulity. When nothing is believable, what’s the point in even pretending?

Here are some truths which I believe to be self-evident: that the USA has been running on fumes since the beginning of the 21st century. That you can’t get something for nothing, and attempts to do so always end in tears. That massive expenditures of energy produce equivalent globs of entropy – which you can translate to “bad ju-ju” or the tendency of whatever can go wrong to go wrong. That because we’re unwilling to re-scale and reform the things we do, nature is about to do it for us. That America has transformed itself from a nation of earnest, muscular, upright citizens to a land of overfed barbarous morons ruled by grifters. That what has been economics is about to turn dangerously political.

The greatest loss of the last decade was not in 401-Ks or manufacturing jobs or foreclosed houses, but the rule of law. Without genuine rule of law, anything goes and nothing matters. As a consequence of that, finally, everything goes. The rule of law is what kept foreigners buying our debt all these years (the fumes we’ve been running on). They kept buying because they believed, when all was said and done, that Americans would enforce contracts and regulate behavior in the direction of fair dealing – not for its own sake but because it made things work better. But when the rule of law goes here, the rest of the world will notice its absence. They’ll stop believing in our money and our future. They’ll cash out and we’ll wash out. Then, as human tribes are wont, they may just turn around and kick our ass because we’re down.

The comprehensive failure of leadership deepens every week, as does the gulf between what people like Barack Obama and Mitch McConnell say and what is really happening on-the-ground in the arena of everyday life. Storyline: last week, Mr. Obama hailed the revival of the automobile industry with the debut of Chevrolet’s new electric car, the Volt. Reality: at $41,000 retail, nobody outside lower Manhattan, Hollywood, or K Street will have enough money to buy one. Storyline: Mitch McConnell inveighs against a bill to require corporations to take responsibility on camera for their political advertisements; he says it will lead to job losses.  Reality: the Senate Minority Leader is shilling for corporations that want to run massive, unlimited ad campaigns in support of corporate agendas – such as off-shoring jobs.

The failure of leadership extends through government to the news media to business to the universities to the courts. All authorities are suspect. All are dishonest and cowardly. When the attempt to enforce some basic rules of decency in banking ends up in legislation that runs two-thousand pages, the rule of law is dishonored. Anyway, adding that much unneeded complexity to a system that is already too excessively complex to function anymore must be an obviously bad move. The Glass-Steagall act was under forty pages. Why not just correct the mistake we made eleven years ago and vote it back into existence? Somebody must know where it is – in some back filing cabinet of the Library of Congress.

In times like these politics gets very crazy. The public forgets how misled and confused it is and develops vicious certainties that do not necessarily jibe with reality. The public becomes a mob and democracy turns into a kangaroo court, which is to say: a mockery of the rule of law. I suspect we’ll see a correlation of turbulence in politics and markets as the weeks pound forward toward Halloween. By election day, democracy itself will be in disrepute and the streets will run with mad dogs. When this sucker goes down (to paraphrase a past president) it’s going to be like a fire in a circus tent. Don’t expect much from the clowns’ bucket brigade. We’ll be lucky if they don’t toss gasoline into the grandstands.

I doubt I’m the only one who senses something in the air – and not just the impressive heat and humidity. Anyway, I’m going off for a few days’ vacation this week to do no more than walk around in the salt air beside the ghost-filled ocean.

This article was reprinted with permission of Mr. Kunstler.  To read Mr. Kunstler’s bio click here. Click here to go to Mr. Kunstler’s web site. A sequel to James Howard Kunstler’s 2008 novel of post-oil America, World Made By Hand, will be published in September 2010 by The Atlantic Monthly Press.