Home
»
Political Analysis
»
The Recession is Over? Really! 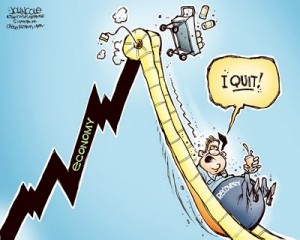 I was dumbfounded by the headline “Recession Ended in June 2009” that came out earlier this week.  The National Bureau of Economic Research (NBER), which is a panel of academic economists, called an end to the longest recession since WWII.  According to a statement by the NBER, “the committee did not conclude that economic conditions since that month have been favorable or that the economy has returned to operating at normal capacity. Rather, the committee determined only that the recession ended and a recovery began in that month.”  So, the recession is over simply because the NBER said it was over?  What?  Here we go again. More spin that says we are having a so-called “recovery” when nearly all signs out there say there is no real recovery.  (Click here for the complete NBER statement.)

On the same day the headline came out from the NBER, the other headline on the same page said “Homebuilders Confidence stuck at 18-month low.”  The Associated Press story said, “The National Association of Home Builders said Monday that its monthly index of builders’ sentiment was unchanged in September at 13. The index has now been at the lowest level since March 2009 for two straight months.  Readings below 50 indicate negative sentiment about the market. The last time the index was above 50 was in April 2006.”  (Click here for the complete AP story.)

I could not believe my eyes that these two stories wound up on the same page yesterday.  Is the NBER crazy?  I don’t know, but this group of academics has lost all credibility to me.  No one in the mainstream media called BS on this story.  They just reported it with a straight face—how amazing!

Someone should inform the Federal Reserve the recession is over so it can start raising rates and tightening the money supply.  Oh wait!  The Fed met yesterday, and it’s not worried about the economy shooting up but falling off a cliff!  A Reuters story said, “The Federal Reserve on Tuesday inched closer to fresh steps to bolster a sluggish U.S. recovery . . .”  “Bolster a sluggish recovery” will be done with Quantitative Easing, or money printing, of reportedly another trillion bucks.  This is not the hallmark of a robust economy.  The story goes on to say, “. . . JPMorgan economist Michael Feroli wrote in a note to clients. “The Fed is now admitting that they are not hitting the inflation mandate, clearly not hitting the employment mandate and — with subpar growth forecasted for the near term — not even moving in the right direction.”  The “right direction” means growing, and that’s something the economy just isn’t doing.  (Click here for the complete Reuters story.)

You don’t have to be an economist to know the economy doesn’t have enough horsepower to pull the hat off its head.  According to a recent survey by the polling firm StrategyOne, two thirds of Americans think the economy will go into the tank on a double-dip recession.  According to a PRNewswire story, “Almost two in three Americans (65%) say a double-dip recession — defined as a recession followed by a short-lived recovery, followed by another recession — is now likely to happen. Among those who expect a double-dip recession, nearly half (44%) fear it will be worse than the first one, with 21% worried it will be “much more severe.” Just 24% think the second recession will be less severe.  These findings come from a recently conducted survey of 1,043 Americans by the polling firm StrategyOne, a Daniel J. Edelman company.”  (Click here for the complete story.)

I don’t know why the mainstream media and mainstream economists are determined to tell the public we are in a recovery when we are clearly not.  My guess is things are much more dreadful than anyone would admit, and even in the ranks in the upper echelon of the business world–there is fear.