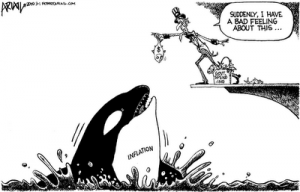 You and I are in the Taxpayer Club. We are the working class of America; you know, the part that has to pay for the stimulus programs and Wall Street bailouts. We are the club that gets stuck paying the bill for excessive government. We have to work thirty or forty years to retire while bailed out bankers knock down million dollar bonuses.   While the Taxpayer Club is getting poorer, there is another club in America getting wealthier– the Government Club.

For example, let’s look at the US Department of Transportation in the Government Club. According to a recent USA Today article, “The growth in six-figure salaries has pushed the average federal worker’s pay to $71,206, compared with $40,331 in the private sector.  When the recession started, the Transportation Department had one employee earning $170,000 or more; eighteen months later it has 1,690 employees earning $170,000 or more. . . . The trend to six-figure salaries is occurring throughout the federal government, in agencies big and small, high-tech and low-tech. The primary cause: substantial pay raises and new salary rules.” There are many examples of how the Government Club is growing in the face of more than 8 million jobs lost in the private sector.

Another example is General Motors, who many have relabeled Government Motors after the federal bailout last year. It cost the taxpayers $50 Billion to save GM alone. According to a recent Fox News article, the new GM CEO will be paid $9 MILLION A YEAR!

Please explain why the CEO of GM should be paid $9 Million a year by the taxpayer? I calculate that to be $4,326 an hour. The CEO of GM earns as much in TEN HOURS as the average private sector American earns in a year. The President makes $400,000 a year. That means the CEO of GM makes 22.5 times what our President does. Which job is more important?

And you cannot forget the most privileged members of the Government Club–Congress. Can you work for twelve years, retire with a full government pension and a Cadillac healthcare plan? No? You and I, the Taxpayer club, are in Social Security and Medicare while our friends in Congress exempted themselves. Do you think these nearly bankrupt programs would be in the shape they are in if Congress were recipients?

Do you know why members of Congress average better than average returns in the stock market than the Taxpayer Club? They are exempt from insider trading laws. The people that write our laws put themselves outside of the law.  They even get to vote on their own pay increases and benefits.

Do you really believe Democrat Charlie Rangle did not know he owed taxes when he sat atop the committee that writes tax law? Rangle is currently under investigation. Let’s hope it doesn’t turn out the way Republican Congressman “Duke” Cunningham’s did. He is currently serving time in the slammer for taking $2.4 million in illegal bribes.