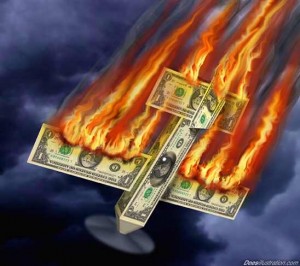 Last week, three stories acted as signposts for the direction of the U.S. Dollar value.  The first is about a letter President Obama sent to members of the G20 (Group of 20 major industrial countries) in advance of next weekend’s meeting in Canada.  The President’s letter asked members to “reaffirm our unity of purpose to provide the policy support necessary to keep economic growth strong.”  The policy he is talking about is to print money and run monstrous deficits to keep the world economy afloat.  The talk in Europe is just the opposite.   The EU these days is all about austerity and budget cuts which are hardly pro-growth.  The Associated Press reported the story this way: In the letter, Obama said that the June 25-27 summit should also focus on efforts to stabilize public deficits in the “medium term,” a reference to the administration’s position that governments need to run huge deficits currently to provide the stimulus needed to ensure a sustained recovery but then move in future years to deficit reduction efforts.  (Click here for the entire AP article.)

The second story illuminating the dollar’s path comes from Alan Greenspan.  The former Fed Chief gave a warning about how the U.S. may soon reach its “borrowing limit.” A Bloomberg story quoted Greenspan saying, “The federal government is currently saddled with commitments for the next three decades that it will be unable to meet in real terms,” Greenspan said. The “very severity of the pending crisis and growing analogies to Greece set the stage for a serious response.” (Click here for the Bloomberg article.) Please note Greenspan’s reference for the U.S. “commitments” that it, “will be unable to meet in real terms.” That surely means the government will simply print money to pay its bills.  The Federal Reserve could end up being the buyer of last resort for America’s debt, and that is highly inflationary.

This brings me to the third story indicating the future direction of the dollar.  The headline says it all: “Gold hits record as investors seek alternate asset.” (Click here for the complete story.) The only conclusion you can draw is investors are seeking a stable store of wealth.  According to world renowned gold expert Jim Sinclair(jsmineset.com), that spells trouble for the dollar.  Sinclair said, “. . . that’s not a pleasant conclusion because it speaks of a currency system in the entire Western world that is being significantly challenged.”

In an exclusive interview with USAWatchdog.com, Sinclair compared the U.S. to Greece– the same as Greenspan.  Sinclair said the dollar’s true weakness has been concealed because the attention has been on Europe.  Sinclair said, “We’re rolling over in this so-called economic recovery . . . It’s not a pretty picture, and the focus will come off Europe as soon as all the currency traders have made all the money . . . (then) it’s coming right back here. . . You look over here and you see 33 states are headed towards bankruptcy.  What’s the difference between that and Greece?  There’s none.”

I asked Sinclair when will the dollar start plunging?  He said, “The time horizon, I think, is four months.” A plunging dollar will quickly cause higher prices for goods and services and, if things get really bad, Sinclair says, “If, in fact, this thing gets out of control, you’ll see decreasing supply (of goods) because of economic disruption of the means of distribution.”

Under an extreme loss of value for the buck, you can forget about cheap oil and gasoline.  Sinclair says, “If the dollar falls out of bed, they shoot to the moon.” Sinclair thinks what is taking place now is a “change in psychology and a loss of confidence that are now beginning to show themselves in market terms.  You will still have the dollar around.  It will still be in bank reserves, but its buying power will be severely reduced.”

This change in psychology is driving gold to one record high after another.  Since 2001, Sinclair has been calling for gold to reach $1,650 a troy ounce by January 14, 2011.  Some of Sinclair’s contemporaries are calling for gold to be much higher by next summer.  $5,000 per ounce by June is one prediction.  Sinclair says, “. . . that only occurs if the whole thing goes splat,” and that is also a real possibility.