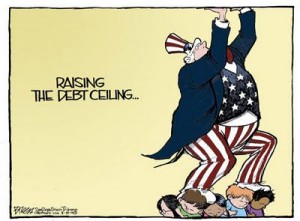 It is amazing that so few people know or want to know about the debt ceiling negotiations going on in Washington D.C. this weekend.  It has been reported the raise is in the neighborhood of $2.4 trillion.  That’s 2,400 billion bucks, and please remember a billion is 1,000 million.  On the other hand, the public is being bombarded with every tiny detail about the Casey Anthony case by the mainstream media.  The President said yesterday that Democratic and Republican leaders will work the weekend to hammer out some sort of compromise.  In simple terms, the impasse comes because the Republicans do not want tax increases in a down economy, and Democrats do not want entitlements and government programs cut in a down economy.   We will see if they can cut up to $4 trillion out of the budget over the next 10 years or so.  Congress could not even cut $60 billion out of the budget a few months back.  According to the Washington Post, the $38 billion that was cut, in actuality, was only a mere $350 million.  Fat chance on cutting up to $4 trillion, which by the way is $4,000 billion.  The big take-away here is that for the first time in modern history, we are openly talking about the possibility of the U.S. government defaulting on its debt.  The date certain is August 2, 2011.  If there is no deal by then, all hell will break loose.  I think they will get a deal so the economy doesn’t  implode, but the last time the two parties had a stand-off like this, they didn’t cut a deal until one hour before a forced government shutdown.  For common folk like me and you, the only thing you can count on is higher inflation.  By the way, there has been talk about the President using the 14th Amendment to by-pass Congress and order Treasury Secretary Tim Geithner to pay the lawful bills of the U.S.  This is a Constitutional can of nasty worms, and there is not a chance the President will try this–no way.  They reach a deal or they don’t.  It is that simple.

In the Greek debt arena, it looks like troubles for Greece and the world are far from over.  Now, one of the ratings agencies says the deal that was cut for austerity (higher taxes and less government entitlements and programs) may not work.  This could be considered a “selective default.”  It could also affect future deals with Portugal, Spain and Italy which also have big sovereign debt problems. On top of that, German high courts are wrestling with the fact the Lisbon Treaty (which is the basis for forming the European Union) has a “no bailout” clause.  Which means it is illegal to take money from one country, say Germany, and give it to another country, say Greece.  The fate of the EU may be in the hands of the German courts.  The German finance minister, once again, warned this week if a deal is not reached on how to deal with the sovereign debt crisis, then a daisy chain of defaults could spread across Europe.  The U.S. could be severely affected if this goes sour, so continue to keep an eye on this important story.

Yesterday, there was some good news on the employment front.  ADP, the payroll people, said 157,000 real jobs were created.  88,000 came from small business.  Also, some of the automakers are hiring a few thousand people.  The mainstream media hailed this as a turnaround in the economy.  It is not, and today’s unemployment numbers prove my point.  The official unemployment rate bumped up to 9.2% from 9.1%.  We lost more jobs than we created.  Also, Challenger, Gray and Christmas (employment specialists) said this week that planned layoffs are up more than 5% from the same time last year.  In June, planned layoffs are stated at 41,000.  This story has gotten little attention.  Things are going to get worse for employment and the economy, and I’ll be doing a post on the real unemployment numbers on Monday’s post (as long as something does not blow up over the weekend.)

Here’s some real good news.  Senators Rand Paul and Jim DeMint are sponsoring a bill called the “Sound Money Protection Act.”  It basically will do away with federal capital gains taxes on gold and silver coins.  The idea here is to get people to use the coins as money.  The value will be based on the actual bullion weight, not the silly amount stamped on the coin.  For example, a Gold Eagle one ounce coin is stamped with $50 on it, and gold is way over $1,500 per ounce at this writing.  The complete story is on the USAWatchdog.com site under “Hunter’s Top Stories.”

I had a story in the video presentation about HSBC and JP Morgan Banks being hit with federal RICO lawsuits over the alleged manipulation of gold and silver.  I could not independently confirm the new charges, so I took the story and video down.  There have been allegations of manipulation in the past with these two banks but, once again, I could not confirm the new charges.  On the other hand, there are new charges of “fraud” coming out of the UK over the Exchange Traded Funds (ETF) market.  That story is on the USAWatchdog.com site as well.

There is also a deal with the U.S. and Mexico over trucking.  The deal has been stalled for 15 years.  There have been questions of safety with Mexican trucks, and that has been reportedly worked out.  The reason the U.S. is motivated to allow Mexican trucks into the U.S. is the loss of $2 billion in trade because of Mexican tariffs.  So the farmers and other folks are happy, but the trucking industry is mad as heck.  I am sure it will fight this deal.  This is only a pilot program, so don’t expect to see thousands of Mexican trucks on our roads anytime soon.  I feel there is a sovereignty issue here, and there will  be much opposition from many different groups, not just the trucking industry.

Finally, the Casey Anthony story.  I am embarrassed to know what I know about this story, and I have been trying not to pay any attention to it.   I have said this before,  I don’t know if the jury got it right, but I do know the mainstream media (MSM) spent lots of money and lots of time covering this travesty.  It will not matter to 99.999% of Americans.  However, people know very little about the $2.4 trillion raise in the debt ceiling, and either way this goes, it will affect 99.999% of Americans.  I blame the MSM for this, and it is why the mainstream media is on a downward trajectory to irrelevance.  That’s the way I see it this week.  Thank you for supporting USAWatchdog.com.