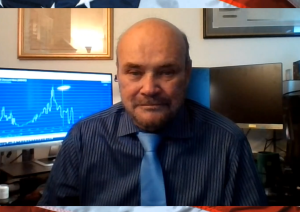 Legendary financial and geopolitical cycle analyst Martin Armstrong says, “The cheating in the midterm election next week is going to be so great that it is almost impossible to make a prediction. . . . In a fair midterm election, the Republicans would win the House and the Senate.”

So,m what does his Socrates program see for next week?  Armstrong, says, “It’s going to be tight, and the Republicans have a shot at taking the House.  Technically, they should take the House and the Senate.  I am just not sure.  The corruption is so bad, it’s crazy.  Pennsylvania sent out hundreds of thousands of ballots to people who are not documented or even American.  I’ve gotten emails from people in Canada, they are getting mail-in ballots.  They mailed them to Canada. . . .Where this ends up, who knows?  It’s just so corrupt, it is over the top.  It doesn’t matter who wins.  Nobody is going to accept this thing, and that is the problem.”

The cheating is going to be so in your face President Trump may not even be able to run for President two years from now.  Armstrong contends, “We may not even have an election in 2024.  It is not looking very good, and it’s probably because this election is not going to be accepted.  When it is so over-the-top corrupt, what do you do for the next one?  The United States will not exist after 2032.  After 2028 and 2029, we are going to have to redesign a government from scratch.  America is being destroyed.  Republics always end in absolute corruption.  We just saw the same thing happen in Brazil.  They staged a major effort to take Bolsonaro out. . . . This is a worldwide effort.  They had to get rid of Trump.  The other one who stood in their way is Bolsonaro.  Then there is Putin (Russia) and Xi Jinping (China).  I think you are going to have historians look back at this 50 years from now, and they will call this period ‘The Climate Change Wars’. . . .They are trying to take down as much oil energy capacity as possible.”

Armstrong is still seeing very strong signals on domestic violence everywhere.  Armstrong explains, “Our computer is showing it’s going to be a rocket launch for volatility and civil unrest next year.”

Armstrong also contends there will be a major loss of confidence in government around the world.  That means gold will start having big demand from big money.  Armstrong also predicts, “The whole monetary system as we know it is collapsing.  That was what the bond crisis in the UK was about.”

Join Greg Hunter of USAWatchdog.com as he goes One-on-One with Martin Armstrong, cycle expert and author of the new book “The Plot to Seize Russia, Manufacturing World War III.” Armstrong is giving the book away if you attend in-person the “2022 World Economic Conference” in Orlando, FL, next weekend.

Armstrong’s book, “The Plot to Seize Russia, Manufacturing World War III,” will be given away if you sign up for the “In-Person” conference below.  There will be a book buying link posted soon on ArmstrongEconomics.com, so be on the lookout for it.

For tickets to Armstrong’s “2022 World Economic Conference” in Orlando, FL, November 11, 12, and 13, click here.  (There are three different tickets levels: Virtual, Virtual Plus and In-Person.  Just scroll down to learn about all three.)