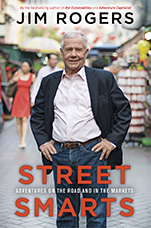 Legendary investor Jim Rogers is worried about unprecedented money printing around the globe.  Rogers says, “We have never had every government debasing their currency at the same time. . . . This is the first time in recorded history where you have most of them doing it all together.  These are perilous times . . . one way or another, this is going to end badly.”  Rogers owns gold and thinks last week’s gold sell-off was a good thing.  Rogers says, “This is normal.  This is not unusual.  I welcome it.  I expect gold to go much, much, much higher over the next decade, but it will not and cannot until it starts having normal corrections.”  How high will gold go?  Rogers says, “If the U.S dollar becomes confetti, any number you want to make up.  They’re printing U.S. dollars fast enough to turn them into confetti.  Who knows how high gold will go as long as we have a mad man running the central bank.” Join Greg Hunter as he goes One-on-One with Jim Rogers from Singapore.