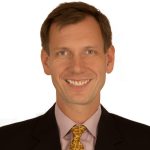 Money manager Axel Merk has a lot of uncertainty to navigate these days between the extreme geopolitical risks, such as China’s neighbor, North Korea, and heavy debt loads that are ballooning budget deficits. Merk says, “It’s amazing.  If you are not confused, you are probably not paying attention.  I am very worried when asset prices are very expensive, what’s going to happen to them.  The thing I am most worried about is how a trade war might derail things.  I don’t think a trade war is going to happen because of a border tax. . . . I think it’s going to happen because the Chinese are going to feel bullied or pushed by the Americans.  Be that because of the THAAD System in South Korea or be that because of the islands being built up in the South China Sea, and the U.S. trying to push them back.  The Chinese are potentially going to make things unbearable for corporate America.  That’s what is going to have an impact on the markets and not what the President Tweets about what he likes or dislikes.”

Merk, who manages hundreds of millions of dollars, thinks the global economy is fragile and could be taken down by a variety of things, including the next federal budget deal in October. Merk says, “These October budget deadlines should be taken very seriously.  It’s not so much I am too concerned about a government shutdown.  If that were to happen, the markets haven’t fallen out of bed, although you never know what is going to derail the market. I happen to think these markets can be tipped over by anything. With hindsight, I’ll be able to tell you with certainty that it was a shutdown, or something in the South China Sea, or maybe some leader coughing somewhere.  More importantly, in these October deadlines, some real reform can be pushed through.  Nothing gets the administration moving like a good crisis.”

Merk says he sees a bubble when he looks at the sky high financial markets. Merk explains, “To me, the complacency expressed as volatility is the best bubble indicator.  In the late 1990’s, I got out of stocks.  In 2007, I got almost entirely out of stocks.  The reason was you were in this Goldilocks economy. . . . It’s difficult to time exactly when the top is, but when volatility is low and asset prices move higher . . . at the very least, I would encourage people as things go up, you take some chips off the table.  You rebalance, and people haven’t done it because there is nothing good to put it in.  So, instead, people are trying to buy insurance or this or that.  Cut it out.  Be honest and take some chips off the table, and if nothing else, hold some cash.”

Merk contends the “easiest diversifier is gold.” Merk explains, “I do very much have gold.  I have it in physical form and exchange traded form and other means of investing in gold.  Yes, I say it’s the easiest diversifier.  It’s not always the best diversifier.  Again, I do like it.  The reason why I say easy rather than best is if you do it for portfolio allocation, what you want is something that has a positive return and has a low correlation to what you have.  In the long run, gold has proven that. . . . Since the early 1970s, gold has had an annual return of 8%.  Going forward, people say yeah, but it doesn’t pay any interest.  Maybe what is paying interest does not pay you a real rate of return.  Otherwise, gold would not have an average 8% return per year.  Even though the Fed is raising rates, I think the Fed is going to be behind the curve.  So, I think gold will be doing just fine.”