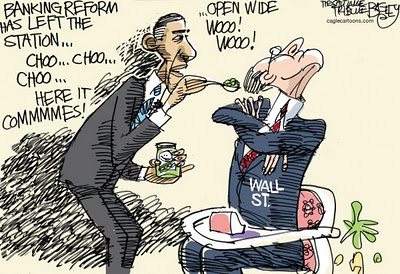 Both the House of Representatives and the Senate have passed their versions of financial reform legislation.  Now, the process of reconciliation takes place between both bodies of Congress to iron out a final bill the President can sign into law.  There is plenty in the bill such as new consumer protection, increased power given to regulators to prevent systemic risk, and new powers to oversee the $600 trillion derivatives market.  These are just a few of the highlights, and there is no telling what will actually end up in the final bill.   (The derivatives problem alone can kill the U.S. economy.  I wrote about this in a post called “Can The Financial System Really Be Fixed? Some Say No.”)

“Too big to fail”

The most important issues that could cause another financial crisis are not covered in the pending legislation.  The biggest problem is the enormous size of the institutions being regulated.  “Too big to fail” means they are simply too big, and shrinking them is not on the table.  Last month, Senator Sherrod Brown (D-Ohio) explained the size problem this way: “Fifteen years ago, the assets of the six largest banks in this country totaled 17 percent of GDP.  The assets of the six largest banks in the United States today total 63 percent of GDP, and that’s too (big)–we’ve got to deal with risk to be sure, but we’ve got to deal with the size of these banks, because if one of these banks is in serious trouble, it will have such a ripple effect on the whole economy.”

After the Senate passed its version of financial reform, Representative Alan Grayson said, “Too big to fail means too big to exist.  We have to systematically dismantle the institution that caused the systemic risk to the economy and that, for sure, the Senate bill does not do.”  I don’t see any way we are going to see a breakup of the banks.  There are some amendments that will force banks to spin off risky trading operations.  The banks are against any trading restrictions or spin-offs.  So, getting that into a final bill is going to be tough. I don’t think the big banks will get appreciably smaller until after the next meltdown, and one is coming sooner than later.

There was a time when banks were not allowed to take on too much leverage.  The max was about 10 or 12 times capital.  During the Bush Administration, the caps on leverage were unlocked and banks took on insane amounts of risk.  During the last financial crisis, it was not uncommon for banks to be leveraged 40 times capital (sometimes even higher!)  The pending financial reform legislation doesn’t really address limits on leverage.  To be fair, President Bill Clinton signed into law the Gramm-Leach-Bliley Act (GLBA) in 1999.  That legislation repealed the Depression era laws of the Glass-Steagall Act and allowed banks to have unlimited growth and take on much more risk.  Without GLBA, also know as the Financial Services Modernization Act, the banks would have never grown “too big to fail.”

Neither the House nor Senate bills address failed mortgage giants Fannie Mae or Freddie Mac.  The government took over these two institutions in 2008.  They have a combined taxpayer liability of more than $6 trillion!  There is not a mention of reform or how we are going to budget for this slow motion train wreck.  I guess if Congress just ignores a problem, it doesn’t exist or it will vanish all on its own.  Omitting this from financial reform legislation is too stupid to be stupid.

The Fed gets more power!

Finally, the big winner in all of this is the Federal Reserve.  The regulator who stood by and watched as the financial system spun out of control is going to be rewarded by getting more power!  These are the same people who fought regulation of the derivatives market and pushed for repeal of the Glass-Steagall Act.  The Fed will likely get authority to oversee a new consumer protection division for businesses such as mortgages and credit cards.  Also, the Fed will supervise the biggest and most complex financial companies.  This is like the proverbial fox guarding the hen house.  The pending legislation may force an audit of the central bank, but I wouldn’t count on any meaningful look at the secret deals of the Federal Reserve.  I hope I am wrong.