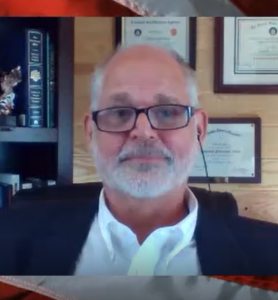 Former CIA Officer and whistleblower Kevin Shipp says the so-called whistleblower the Democrats are using to try to impeach President Trump is part of another Deep State hoax. Shipp says, “This is not a whistleblower. Let’s just start with that. This is a leaker. This person did not have anything to blow the whistle on. Everything written in this document is written not by this leaker, but by attorneys, and it is hearsay. There is no evidence in it whatsoever. It is not a whistleblower complaint. He did not go through proper channels. He went directly to Congressman Adam Schiff, and people have got to understand this is another shadow government Deep State operation actually trying to remove the President. What they did was real sly. If they would have brought this leaker ahead, they would have taken him apart. The whistleblower, or leaker, would have been investigated. Everybody connected with him would have been investigated. . . . So, what they craftily did was put him under the whistleblower statute so he could not be investigated. The mysterious sources he was using could not be investigated, and that’s their plan. That’s what they did and also actually changed the whistleblower rules to include hearsay, which would have been thrown out of court. This is a Deep State operation like Russia collusion 2.0. . . . This is another criminal operation to impeach Donald Trump. . . .This is very similar to a KGB or SVR operation.”

Shipp says this type of hoax could not be perpetrated on the public without the help and coordination of the mainstream media (MSM). Shipp explains, “What they do when they do these operations, and they are so full of themselves and have used them so many times before, the reason why people don’t realize this is the news media, the arm of the Democrat Party and the Deep State, are lying like Adam Schiff, like CBS and others are lying about the facts. So, people watching these news organizations don’t realize how stupid this is and what essentially is another coup.”

Planners of the first President Trump coup, high ranking rogue FBI employees, used what they called a “Media Leak Strategy” to leak information to the propaganda press and then use the articles written by them to back up their phony narrative. Shipp says this is happening again with the latest CIA leaker. Shipp contends, “This leaker, plant got this false information and gave it to Adam Schiff, and then they created their own news stories about this. Then this whistleblower used those news stories to try to add credibility to the garbage he’s put in the complaint. That is exactly what they did here.”

Speaker of the House Nancy Pelosi says the impeachment inquiry “will be worth it” even if the Democrats lose the House of Representatives in 2020. What?? How can an amateurish phony whistleblower story, they are using to try to impeach President Trump, be “worth it”? Shipp says, “It’s going to be worth it because it’s going to keep a lot of them out of prison and reveal the extent of this. It goes all the way to the former President of the United States Barack Obama, George Soros and globalism. It all leads to that, and they know it. It is more important for them to stay out of prison than win the Election of 2020. They are going to dramatically hurt themselves because this is going to come out. Trump is going to win in a landslide, and a lot of them are going to lose their seats. Pelosi does not care about that. What she cares about is what is really going on behind the scenes, and it’s this deep dark criminal globally-connected operation, including the Clinton Foundation, that they are trying to cover for.”