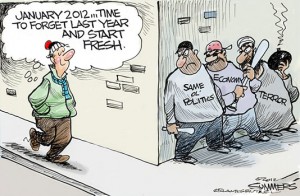 Last Friday, the Bureau of Labor Statistics (BLS) said 200,000 new jobs were created which dropped the unemployment rate to 8.5%.  Break out the party hats and champagne, we’ve finally hit bottom and are heading back up!  That’s the way the mainstream media (MSM) reported it, and in a campaign year, President Obama took a victory lap.   Reuter’s reported Obama said, “We’re making progress. We’re moving in the right direction. And one of the reasons for this is the tax cut for working Americans that we put in place last year. . . .When Congress returns they should extend the middle class tax cut for all of this year, to make sure we keep this recovery going.” (Click here to read the completer Reuter’s story.)

Economist John Williams of Shadowstats.com says the government reported more than 40,000 jobs that didn’t exist.  In his latest report, Williams said, “The reported seasonally-adjusted 200,000 jobs surge in December 2011 payrolls included a false, seasonally-adjusted gain of roughly 42,000 in the “Couriers and Messengers” category.”  Williams went on to report, “While today’s happy labor data likely will fuel financial-media and political talk of an improving economy, the underlying reality remains bleak, with data later this month and next generally tending to confirm the ongoing bottom-bouncing of the U.S. economy in a severe downturn.”  (Click here to go to the Shadowstats.com home page.)  If unemployment was calculated the way BLS did it in 1994 and earlier, it would be 22.4% according to Williams.

By the way, the “tax cut” amounts to $20 a week on average, and it cuts cash to fund things like Social Security.  Of course, nobody is talking about how Social Security went “cash negative” in 2010.  The Washington Post reports, “Now, Social Security is sucking money out of the Treasury. This year, it will add a projected $46 billion to the nation’s budget problems, according to projections by system trustees. Replacing cash lost to a one-year payroll tax holiday will require an additional $105 billion. If the payroll tax break is expanded next year, as President Obama has proposed, Social Security will need an extra $267 billion to pay promised benefits.”  (Click here to read the complete Post story from Oct. 2011.)

Cutting Social Security sounds more like desperation to me and not a real recovery.  Bill Gross who heads up PIMCO (an investment fund with more than $1 trillion under management) recently gave a dire 2012 investment outlook.   He starts off by saying, “It’s as if the Earth now has two moons instead of one and both are growing in size like a cancerous tumor that may threaten the financial tides, oceans and economic life as we have known it for the past half century. Welcome to 2012.”    Gross thinks the world could experience big inflation or big deflation in 2012.  I think bankers would rather live with inflation than take the losses deflation will deliver.  So, I think inflation for 2012 is a lock, and that could turn into hyperinflation, but who knows about the timing of the latter.  Gross closes his outlook by saying, “The New Normal is “Sub,” “Ab,” “Para” and then some. The financial markets and global economies are at great risk.”  (Click here to read the complete Bill Gross investment outlook from PIMCO.)  Please keep in mind, this is not some nut job living in a cave in Afghanistan, but a highly respected investor and money manager.

I think the best and most succinct 2012 prediction comes from renowned investor Jim Rogers.  He says, “. . . they’re going to make us all feel better for a while” because politicians will push money printing during a big election year.  Rogers thinks what’s been going on is a “charade” and come the fall–look out!  “This is all going to end in a terrible disaster for all of us . . . by the fall of 2012 I’d be very worried.”  (Click here to see the complete interview of Rogers on the European edition of CNBC.)

The economy is clearly not headed for a real recovery, no matter how many positive reports are conjured up by the government.  The government and the MSM can mask the decline, but they can’t stop it.