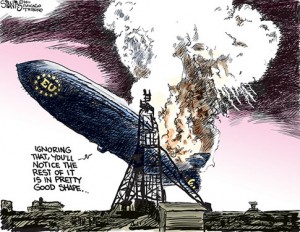 “Disintegration.”  That’s the word both billionaire George Soros and French President Nicolas Sarkozy have recently used to describe what’s going on with the European economic crisis.  It is really a solvency crisis for the big banks there, and leaders are trying desperately to fix the problem.  Last week, 26 European countries agreed to give up sovereignty and vote for new rules on tax and spending and tough sanctions to enforce them.  One country, the United Kingdom, voted “no” in the form of a veto from Prime Minister David Cameron.  Here’s how British newspaper The Sun reported the story, “The PM vetoed a new treaty and kept Britain out of a dodgy deal to save the euro.  But his bulldog spirit left the nation facing an unknown future and risking an EU backlash.  The PM defended his historic veto of an EU deal intended to save the euro — despite infuriating pro-Europeans.”  (Click here for more from The Sun.)  Cameron could not give up sovereignty over budgets in his country.  I don’t blame him because, after all, the Brits still have the Pound Sterling and don’t need the Euro to conduct business.

Reuters’ take on the story was decidedly against the Mr. Cameron’s veto and said, “Napoleon dreamed of it, De Gaulle fought for it, but Nicolas Sarkozy may have achieved it — a Europe of Nations with France in the cockpit and Britain on the sidelines.  The French president emerged as one of the big winners of a European Union summit on Friday which ended with up to 26 member states agreeing to move forward in economic integration around the euro zone, and Britain alone in staying out.”  (Click here for more from Reuters.)  But what did these 26 countries really gain?  This is just a pact to cut everything in order to pay back the loans of reckless bankers.  There is no guarantee any of this will work because of the enormous debt in the EU banks.  The financial press will love this deal, but the people of these EU countries will not.

Britain’s decision to stay out of any monetary union is not a sign of harmony but another sign of “disintegration.”  The 26 countries voted, not to liquidate debt, but to keep it afloat.  In the process, they have agreed to add even more to the tab in the form of more bailouts.  Where are the trillions of dollars or euros going to come from?  I’d say the printing press, and according to legendary investor Jim Sinclair of JSMineset.com, money printing will continue to lift gold prices.  In an interview last week, Sinclair said, “The only thing left is to create the liquidity to overcome it. And, with liquidity as your only tool, the risk is hyperinflation. The lack of understanding of what’s brought this about, the lack of understanding that there are no tools in the box that are going to fix it, the understanding that there’s no will to face it politically here or in Europe, it has to convince any thinking person that gold as an asset without any liability attached to it, really the money of the people, is in fact displacing paper, which has been the tool of confiscation of people’s hard work.  Nothing has changed that. There isn’t anyone out there in government that understands that. There are no plans that I see anywhere that have the ability to combat that. The logical conclusion then is that the price of gold will reach much higher levels over time.”  (Click here for the complete Sinclair interview.)

Another sign of “disintegration” is the MF Global bankruptcy and missing funds.  Many have said the money was stolen, but, in fact, it is legally borrowed out of customer accounts to make trades.  The term is called “re-hypothecation.”  Renowned economist Martin Armstrong says it is not just MF Global, but many big banks and brokers do the same thing and have been doing so for decades.  In a recent post, Armstrong said, “In this case former Goldman Sachs’ Jon Corzine is blowing up the World Financial System and former Goldman Sachs’ Gary Gensler, now currently head of the CFTC, pretends to recuse himself from an MF Global investigation, yet in a unanimous vote, “The U.S. futures regulator approved on Monday a rule that puts tighter limits on how brokerage firms can use customer funds, a measure that the now-bankrupt MF Global had encouraged the agency to delay.” So, the CFTC has thus condoned what Corzine did for he can now say see, it was NOT illegal to trade with other people’s money before!  The entire world financial system is in dire need of reform before everything blows up. If you think the Fed or any central bank can prevent a bank run, good luck.”  (Click here for the complete Armstrong post.)

Two different friends of mine called yesterday and told me, “I’m afraid.”  I replied, “You should be.”  Neither has ever done this before, and in my small world, that is just another sign of “disintegration.”