Home
»
Political Analysis
»
What Is the True Cost Of Health Care Reform? 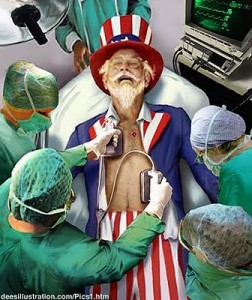 The Congressional Budget Office says Health Care reform will Cost $1 trillion over the next 10 years.  The White House says it will “save “money.  Republican Senator Mitch McConnell said just a few days ago the tab will be $2.5 trillion over the next decade!  Who is right?  I don’t think anybody really knows.  When it comes right down to it, everybody’s guessing.

There are ways being proposed to control costs such as limit the pay and compensation of health care management.  The CEO of Cigna took home $11 million in salary last year.  The United Health Group Chief made more than $9 million in pay last year.  There is no shortage of executives in the health insurance industry who make more than a half million dollars annually.  When health insurance executives knock down big bucks, it is paid for by the insured.  Instead of giving everyone in the insurance pool refunds, executives rake in millions on what is essentially an “overpayment of premium” racket.

Let’s just say every executive in the industry is forced to take a huge pay cut.  How much could that save?  At best say $300 million?  Cutting the exorbitant pay of health care executives would certainly be a moral victory, but it would not drastically cut costs for everyone.  After all, we are talking about a program that is projected to cost at least $1 trillion (one thousand billion is a trillion).  I am not counting on any meaningful cuts in executive pay.

The big problem with the President’s plan is insuring 45 million new people.  Most of these people do not have health insurance because they simply can’t afford it.  There are some who do not want to sacrifice and pay for it.  Under the new plan, denial of coverage for a pre-exsisting condition will be a thing of the past.  That is a great thing for sick people who need coverage.  But let’s say you are not sick.  Under the President’s plan, a person can simply pay a penalty of $695 a year (starting in 2016) and not get health insurance.  (Source: CNN click here for more)  That comes out to about $58 a month.  Remember, when you get sick and really need coverage, you can get it– no questions asked.  Wouldn’t that be a lot cheaper than $300 or $400 a month for coverage that you may not need?  This is one of the ways the system will be gamed.  It will force folks who do the right thing (buy into a plan) to shoulder a much higher percentage of the cost.

What about people who want coverage and cannot afford it?  The President has said many times these people will be eligible for “subsidies.”  I guess the government will just go to the subsidy orchard and pick bushels of subsidies for everyone.  Those “subsidies” will come from taxpayers who will be forced to pay for people who cannot.  Remember, this is 45 million additional people we are talking about, and you cannot insure that many people for free.   The new health care plan will be an additional burden to the economy at a time when comparisons to the Great Depression are routine.

In a perfect world, everyone should have access to health care, but the world the U.S. finds itself in is barely solvent.  There are already two huge entitlement programs the country is struggling to fund.  How are we going to afford a new health care plan (that insures everybody) when we haven’t figured out how to pay for Social Security and Medicare?

I am still predicting the President will win the health care battle but will lose the economy war.  There is no way to predict what the true cost of health care reform will be.  There are only two things you can say–health care reform is a brand-new entitlement, and it will cost big money when it’s enacted.