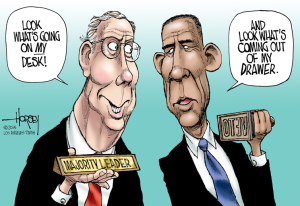 The Republicans now control both the Senate and the House. The mainstream media said it would be close, and it turned into a blowout.  Now, all the blocking that outgoing Senate Majority Leader Harry Reid was doing for President Obama is going to be unblocked, and expect many pieces of legislation to land on the President’s desk.  Yes, the President can veto legislation, but then he will be known as the President of “no.”  Now, for another prediction, but first let me highlight what Reid’s Chief of Staff said after the election this week.  David Krone said, “The President’s approval rating is barely 40 percent,” Krone said. “What else more is there to say? . . . He wasn’t going to play well in North Carolina or Iowa or New Hampshire. I’m sorry. It doesn’t mean that the message was bad, but sometimes the messenger isn’t good.” Yes, you heard correctly.  Reid’s top guy said the President isn’t a “good messenger.” I call that message throwing your party leader under the bus.  Here’s my prediction.  If the President starts to veto bills that try to move the country forward, the Democrats will vote against the President and override his vetoes.  If you think the Democrats were running against the President in this past election, just wait until 2016.  Democrats will be falling all over themselves to say they voted against the President and for the American people.  Democrats will turn on their own President to save their skins.  That said, nothing is fixed.  We still have a cash deficit approaching $18 trillion.  We still have nearly 93 million not in the work force.  We still have record numbers of people on food stamps.  Not a single person in Washington has a clue on how to get this under control before we all go over the cliff right along with the U.S. dollar.

It’s been revealed President Obama secretly wrote a letter to the Supreme Leader of Iran asking for his help in fighting the Islamic State. I thought Iran was on the State Department terror list.  I thought the U.S. and other nations were trying to get Iran to curtail its nuclear program.  I thought we were asking Sunnis to overthrow Assad in Syria that Iran (Shia Muslim) is helping to stay in power.  Confused?  So am I, and I think so is the Obama Administration on Middle East policy.  We are in the process of arming so-called moderate rebels who are Sunni while we are asking the Shia Muslims in Iran to help destroy the Islamic State.  You can’t make this up.  This is a mess, and it is leading us to war and conflict.

Financial war is raging between the West and Russia. The ruble is way down in value.  The Russians are going to make the use of dollars illegal and force people to close dollar denominated accounts.  There are sanctions from Europe and the U.S. on Russia and vice versa.  Now, we hear of a cyber-threat from Homeland Security called “Black Energy” that can shut things like nuclear power plants down.  I am not surprised because in war, even financial war, people shoot back.  Putin was out recently saying that America was creating an “empire of chaos,” and it does not want chaos to spread.  Meanwhile, China keeps opening up Yuan trading facilities.  The latest is in Canada.  This is all dollar negative long term.

Gold and silver prices are being pounded down while demand is very strong. It is so strong that the U.S. Mint reportedly sold out of Silver Eagles.  Let’s get this straight, there is sell-out demand and the price of metal is going down.  That cannot be done without criminal manipulation of the markets.  It cannot and will not last.

On the Ebola front, New York is now actively monitoring more than 350 people for Ebola. This is because of the doctor who returned from West Africa and came down with Ebola.  There are people out there who are saying Ebola is a hoax or a government black op program.  Whatever you want to call it, the story is creepy in how the government is handling this on both sides of the Atlantic.  I still have not heard of a coherent reason why there are not travel restrictions with this outbreak in West Africa.

There is another investigation into JP Morgan, this time, over its foreign exchange business. I am not optimistic of getting any convictions.  The government hasn’t convicted a single high profile banker for massive and obvious crime.  That said, there is a new star witness against JP Morgan, and Matt Tiabbi of Rolling Stone lays out the case in a story titled “The $9 Billion Witness: Meet JPMorgan Chase’s Worst Nightmare.” It’s about a former JPMorgan attorney who says she has evidence of criminal activity by top bankers.  The story also charges that Attorney General Eric Holder helped cover up massive banker crime.