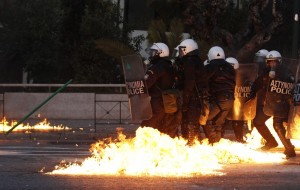 It is said “a picture is worth a thousand words,” and the following story features more than a dozen from Greece, Europe and the Middle East where people are protesting the burden laid on them by the crooked, wreckless bankers.  Nothing is settled in the European debt crisis, and the deal in Greece is on and off and on and off.  This summer, journalists in the USA will probably see some of the same photo opportunities.  This kind of a global story has to make investors a little queasy.   The International Business Times featured a story Sunday that graphically shows major discontent in parts of the rest of the world.  The story said, ” Tens of thousands of protesters took to the streets in several nations this weekend demanding political justice, economic opportunity, and a change to the status quo.

Demonstrators — who powered the Arab Spring, the worldwide Occupy protests during the summer and the anti-austerity marches of the European autumn — have used to past 48 hours to take over the streets of Portugal, Syria and Bulgaria, setting the mood for a veritable winter of discontent.

Here’s a look at some of the public actions:

Greece, Portugal: A huge surge of people heeded a call from Greece’s two main labor unions to march against a second set of austerity measures being contemplated by the country’s political leadership. A new round of taxes, public service cuts, and pension reforms — as well as a slashing of the country’s minimum wage — is being negotiated between Greece’s ruling coalition and various international actors as preconditions for a €130 billion bailout the country is trying to secure. An earlier round of austerity cuts is widely blamed as causing a deep recession in the country, which has seen official unemployment spike to 20.9 percent. Images of bloody confrontations between demonstrators and police have been pouring out of Athens since Friday, though the violence appeared to reach a boiling point Sunday, when protesters attempted to overrun the national Parliament. Similar, if much more staid, anti-austerity protests also took place over the weekend in Portugal and Belgium.

Syria: Even as the country’s military indiscriminately bombs certain cities, demonstrators took to the streets of Syria, demanding the ouster of President Bashar al-Assad. As is common in the Muslim world, public actions began following Friday prayers and have continued all weekend. Demonstrations in solidarity have been staged elsewhere around the world in the past 48 hours, with public support coming from Cairo, Beirut, Tunis, London and Palestine.”  (Click here to read the reast of the story and see the pictures.)