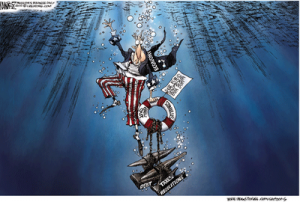 This post is going to be a little different because I want you all to be an even bigger part of the site than normal.  I want you to give me your predictions for 2011.  It can be as simple as what you think the price of gold, silver and oil will be, or as complicated as what country or countries might go to war.Simply make any prediction you wish and, if you can, give a reason for it.   If you do not have a prediction, then just leave a comment and get whatever you want off your chest. If this works out, I’ll do this every year on New Year’s Eve.

There will not be a new post on Monday 1/03/11 as I am going to take a long weekend for the New Year celebration.  USAWatchdog.com really has something to celebrate.  We had 11 out of 12 months of growth in visits to the site.  December (2010) broke all-time USAWatchdog.com records with a 15% increase over November (2010).  For that, I say THANK YOU!  I am hoping we continue to grow and, as my motto says, “Anayze the news to give you a clear picture of what’s really going on!” See you all in 2011 and God Bless America!!!!–Greg Hunter.