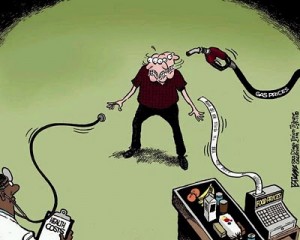 The decision by the Fed, last week, to keep a key interest rate at near zero percent for 2 years is historic because the Fed has never done this before.  This action will have profound negative effect on the U.S. dollar and its buying power.  It also signals that even the Fed thinks the economy is not going to get better for at least 2 years.  This action will affect every American and telegraphs a policy of inflation by the government.  In November of 2009, I predicted this very path in a post called “The Fix is In.”  Back then, I said, “It appears the “fix” is in as far as the road plan for the U.S. dollar and economy.  The government and the Fed appear to have chosen a path of inflation for America and the world.    This is not an official announced plan but it might as well be.”   (Click here for the original post.)

Zero percent interest on a key Fed rate confirms my prediction right along with the rising inflation in just about everything except housing.  In an extensive post about inflation this week, Theburningplatform.com said, “The storyline being sold to you by Bernanke, his Wall Street masters, and their captured puppets in Washington DC is that deflation is the great bogeyman they must slay. They make these statements from their ivory jewel encrusted towers as the real people in the real world deal with reality. The reality since Ben Bernanke announced his QE2 policy in August 2010 is:

The official inflation rate is 3.6%, but anybody with an IQ above 70 knows that’s a statistical lie.  According to economist John Williams of Shadowstats.com, the true annual inflation rate is around 11% (if calculated the way Bureau of Labor Statistics did it in 1980).  In his latest report, Williams warns the dollar is in serious trouble because the Fed is not interested in fighting inflation when it needs to continue propping up the banking system.  The Shadowstats.com report said, “Massive, fundamental dollar dumping and dumping of dollar-denominated assets could start at any time, with little or no further warning.  With a U.S. government unwilling to balance or even address its uncontainable fiscal condition; with the federal government and Federal Reserve ready to prevent a systemic collapse, so long as it is possible to print and spend whatever money is needed; and with the U.S. dollar at risk of losing its global reserve currency status; much higher inflation lies ahead, in a circumstance that rapidly could evolve into hyperinflation.”

Near zero percent interest rates keeps downward pressure on the dollar, but it will retard the investment needed to create jobs in the private sector.  Peter Schiff, CEO of Euro Pacific Capital, says the banks are sucking up most of the available capital and using it for no-risk trades.  In a recent post also titled “The Fix is In,” Schiff said, “It was bad enough that the Fed held rates far too low, but at least a fig leaf of uncertainty kept the most brazen speculators in partial paralysis. But by specifically telegraphing policy, the Fed has now given cover to the most parasitic elements of the financial sector to undertake transactions that offer no economic benefit to the nation. Specifically, it will simply encourage banks to borrow money at zero percent from the Fed, and then use significant leverage to buy low yielding treasuries at 2 to 4 percent. The result is a banker’s dream: guaranteed low risk profit. In other words it will encourage banks to lend to the government, which already borrows too much, and not lend to private borrowers, whose activity could actually benefit the economy.”  (Click here for the complete post from Mr. Schiff.)

Politicians say they want to create jobs, but they stand silent and let the banks and the Fed do just the opposite.  No one will utter a word about fixing the failed system America has right now.  There is no way to have an economic “recovery” if the banks are allowed to be propped up with phony accounting and money printing.  Sour debt needs to be washed out of the system, but that is not happening.  Instead, more debt is piled on, and the few benefit at the expense of the many.  It is not deflation that will ruin life for most Americans; it is inflation that is here and growing.  As George Orwell famously said, “Truth is treason in the empire of lies.”