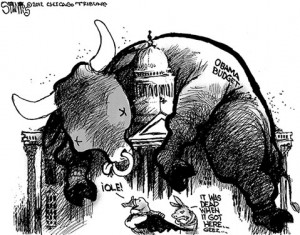 The big story is the continued threat of World War III in the Middle East.  Israeli Prime Minister Benjamin Netanyahu said, this week, sanctions are not working on Iran; and the U.S. Senate is talking about a “time table” to stop Iran’s nuclear program.  A new bi-partisan resolution says that containing a nuclear armed Iran is not an option.  These are just two more signs that war in the Middle East is approaching.  The only question is when?  Meanwhile, the UN condemned Syria for its brutal and deadly crackdown on protesters.  The UN and Arab League are calling for Bashar Assad, Syria’s leader, to step down.  That will not happen without a fight, and Iran and Russia are reportedly continuing to arm Syria.

In other news, President Barack Obama released his 2013 budget proposal this week, and it is chocked full of new taxes and cuts to deductions.  The budget calls for things like taxes for 401-K plans and health insurance premiums and limits to charitable gifts and other write offs.  According to a new report from Senator Rob Portman, the U.S.is set to hit the $16.4 trillion debt ceiling before Election Day.  The country is burning $132 billion a month.

Slog.com is reporting at least two big banks are planning on a Greek Default by March 23.  The only question worth asking after that is who’s next–Italy, Spain or Portugal, anyone?  Foreclosures are going to spike as a result of the $26 billion “robo-signing” deal.  That’s what Realtytrac.com reported yesterday.  USAWatchdog.com predicted this on Monday.  This may be one of the reasons that Thestreet.com is reporting 165 U.S. banks are on the brink of collapse.  Greg Hunter gives you all these stories and more in the USAWatchdog.com Weekly News Wrap-Up.