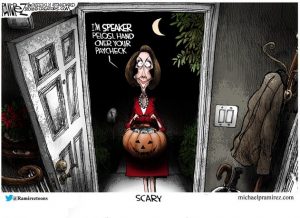 Whether it is the polls done by the mainstream media (MSM) or the phony pipe bombs with no explosives sent to prominent Democrats, this election looks like one giant PSYOP. Democrats have no platform except open borders, pro-illegal immigration, cop hating and tax raising. You simply cannot run on that. So, for the Dems, they have to lie and cheat, and that’s what they are doing.

Who is paying for the thousands in the so-called caravan making its way towards America via Mexico? The MSM would like you to think it’s just a group of people from Central America wanting a better life, but what they don’t say is that it is a well-funded and well organized threat on the southern border of the U.S. It looks like it is to cause even more negative press for Donald Trump and Republicans before the midterm elections. Is it being paid for by the New World Order globalists? The facts clearly say yes.

Is the economy getting better? Is it strong? Some say no, and they point to exploding government debt.

Renowned geopolitical and economic cycle expert Charles Nenner will be the guest for the Early Sunday Release.

One more thing:  I forgot to tell you all to go see the movie “Gosnell.”  He was the mass murdering abortion doctor that murdered babies that were born alive.  It was done by Christians and it was fantastic.  Dean Cain is one of the stars and the action by him and others was top notch.  The story is equally top notch and riveting.  Please go see and support the movie “Gosnell.”  You will be happy you did.