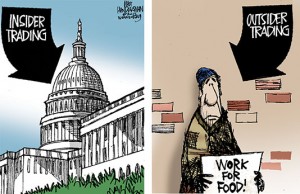 The most recent unemployment number is a total lie, and that lie was repeated all over the mainstream media (MSM).  Two sins were committed here, and I don’t know which one is worse.  The report was a sham, and the MSM reported that information without a single question about its accuracy.  In a story carried across the MSM spectrum, the Associated Press said, “In a long-awaited surge of hiring, companies added 243,000 jobs in January – across the economy, up and down the pay scale and far more than just about anyone expected. Unemployment fell to 8.3 percent, the lowest in three years.”  The report went on to say, “At the same time, the proportion of the population working or looking for work is its lowest in almost three decades. The length and depth of the recession have discouraged millions of people from looking for jobs. The better news of the past couple months has not yet encouraged most of them to start searching again.”  (Click here for the complete AP story.)

Here’s a headline for you.  If it were not for accounting gimmicks and what the government calls “seasonal-adjustments,” the unemployment rate would have gone up, not down!  In his latest report, economist John Williams from Shadowstats.com said, “January’s unadjusted unemployment rate rose to 8.8% . . . The only difference between those numbers and the headline 243,000 January jobs gain and 8.3% unemployment rate, is how the seasonal adjustments were applied.  There are serious issues with the current quality of those adjustments, and extremely small distortions in those seasonals can make big differences in the resulting headline data.”

As far as “discouraged” workers who are not looking for a job, that is total rubbish put out by the government.  The real story is the Bureau of Labor Statistics (BLS) simply has stopped counting more than 1.2 million of the unemployed in its report Friday.   Williams goes on to say, “The issues here suggest that the headline 8.3% unemployment for January has moved well outside the realm of common experience and credibility, into the arena of election-year political shenanigans.”   Williams is such a gentleman.   Please take into consideration the government’s “official” or “headline” number is only based on people being out of work for 6 months or less.  If the unemployment rate was calculated the way BLS did it in 1994 and earlier, the unemployment and underemployment would be 22.5% (according to Shadowstats.com.)

A recent report by a D.C. consulting firm estimates about 3 million long-term unemployed have been dropped from the unemployment statistics in the last few years.  (Click here for that story.)  The Obama Administration has predicted the “official” unemployment rate would be below 8% by the November 2012 election.  Heck, if you stop counting enough people, you can get the unemployment rate down below 5%, and that will make the 15 million or so unemployed feel really good.  Taxpayers are paying to be essentially hoodwinked by the BLS, and the mainstream media never questions these numbers.

Meanwhile, on the very day the fantasy unemployment numbers were released, it was reported that planned layoffs surged.  Reuters reported last Friday, “Employers announced 53,486 planned job cuts last month, up 28 percent from 41,785 in December, according to the report from consultants Challenger, Gray & Christmas, Inc.  January’s job cuts were also up from the same time a year ago, gaining 38.9 percent from the 38,519 layoffs announced in January 2011.”  (Click her for the complete Reuters story.)   With unemployment going up to 8.8% (without the government’s accounting gimmicks), this jobs report is especially dishonest, but almost every month the government lies to America about the so-called “recovery.”

Jim Willie at Goldenjackass.com says the government lies about the economic statistics to hide an economy teetering on the edge of an abyss.  In his latest post, Mr. Willie (who holds a PhD in statistics) said, “The entire system requires the constant banter of recovery, legitimacy, hope, and integrity. All are sorely lacking, glaringly lacking. The economic numbers have few honest series of data. My favorite honest series remains the income tax payroll withholdings, which screams of chronic recession in basic tones. . . . The US economy remains the weakest of all industrialized nations. Its corruption remains the highest in data reporting. See American Airlines for job cuts. See the Manhattan banking sector for job cuts. See state and local governments for job cuts. See college and university construction projects for job cuts.”  (Click here for the complete Jim Willie report.)

The Federal Reserve just announced an extension of 0% interest rates through 2014.  The Fed didn’t do this because it thought the economy was going great guns.  You can say whatever you like about the Fed (I think it should be audited on a regular basis), but those folks are not stupid.  For everybody to believe the economy is surging forward, you have to also believe the Fed and its hundreds of economists got it all wrong.  Last Friday, the government reported an improvement in unemployment when, in fact, it jumped up, which is why I call Friday’s jobs number an 8.3% unemployment lie.