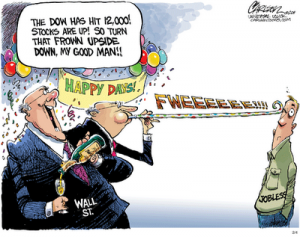 The Bureau of Labor Statistics (BLS) released the latest unemployment figures last Friday.  There was a stunning drop to 9% from 9.4%.  How did that happen?  Is the economy really getting better or is the government up to its old statistical tricks.  According to the mainstream media, the economy is getting better and the so-called recovery is alive and well.  Here’s how the Associated Press reported the story, “The unemployment rate is suddenly sinking at the fastest pace in a half-century, falling to 9 percent from 9.8 percent in just two months — the most encouraging sign for the job market since the recession ended.  More than half a million people found work in January. A government survey found weak hiring by big companies. But more people appear to be working for themselves or finding jobs at small businesses.” (Click here for the complete AP story.)

“More than half a million people found work in January.”  How?  The BLS reported there was only a tiny gain of 36,000 workers to the payrolls, and even that number is a statistical lie, according to economist John Williams of Shadowstats.com.  In his latest report (last Friday), Williams said, “Incredibly, despite ongoing regular overstatement of payrolls by the BLS, the BLS appears to have upped, not lowered, the excessive biases in its latest rendition.  Without the higher bias, the reported January 2011 payroll gain of 36,000 would have been a decline of 52,000.”

As for the big drop in the unemployment number down to 9%, you can credit that with something the BLS calls “seasonal adjustments.”   The government takes into consideration things like cold weather and snow when it puts together unemployment figures.  Williams thinks these seasonal adjustments have been distorted by the dismal economy during the past few years.  Williams says, “. . . the extraordinary severity and duration of the economic duress in the United States during the last three to four years has destabilized traditional seasonal-factor adjustments and the related monthly reporting of certain economic series.  The unemployment rate rose in January 2011, not seasonally adjusted.  The 0.4% decline reported in the headline January unemployment rate appears to be a seasonal-factor issue.”  In other words, seasonal adjustment jobs are created out of thin air and are not really there for people.  In reality, unemployment increased slightly.  It did not decrease.

While we are on the subject of reality, after one year of not looking for work, the unemployed are no longer counted in government statistics.  If unemployment was computed the way BLS did it prior to 1994, the true unemployment rate (according to Shadowstats.com) would be 22.2%.  I wonder why the mainstream media feels compelled to only do stories that support government statistics.  There is bona fide analysis that can show government numbers are rigged to make things look better than reality.

Yesterday, millions of Americans celebrated the unofficial holiday called the Super Bowl.  In closing, I would like to share part of a comment I received recently from a regular reader named Samantha.  She writes, “We are living in Roman circus-like times!  Keep the people entertained and they don’t have to THINK too much and certainly don’t have to notice the corrupt activities of our elected officials.  The “Stupor Bowl” is an intentional dumbing down of our society.”

In no way do I think the government is in control of the Super Bowl, but the media coverage leading up to this event was over-the-top.  One day last week, I was watching one of the cable networks and the rundown went from Egypt (as the top story) to the Super Bowl as the second most important story.  Do you really think the Super Bowl should be the second most important story Americans should be concerned about?   The public is misinformed about the serious and enormous financial trouble the country faces.  I blame the mainstream media for this and the non-stop coverage leading up to the Super Bowl as a prime example.  The MSM spent millions of dollars and hundreds of man hours on this while the country is facing “catastrophic” financial problems, according to a recent speech given by Fed Chief Ben Bernanke.  (Click here for complete story about Bernanke’s speech.)  Yes, the Super Bowl should be covered, but so should many other stories that get little or no attention at all.  There should be some balance.  Instead, all we seem to get from the MSM is superficial news.