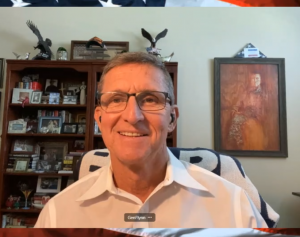 Retired Lieutenant General Michael Flynn, who was head of the Defense Intelligence Agency (DIA), thinks evil communists are out to destroy America and your freedom.  General Flynn explains, “Transitioning to all the noise that is bombarding the American psyche, it’s all intentional.  Don’t think this is all a bunch of haphazard things that are happening within our country.  The bigger 60,000 foot strategic view is that the country is being taken over by a very small minority of people that we call the Left, which are really a group of Marxists and communists who have decided over decades, and this is not just about Trump, have decided now is the time to do it . . . and they did.  They outmaneuvered the Republican establishment during this last November election. . . .Let’s talk about what’s coming out of Arizona.  Everybody knows this election was stolen.  No way in the world 80 million people voted for the administration occupying the White House—no way. . . .This is no longer a conspiracy theory about election fraud.  This is a conspiracy alright, but it is a conspiracy within a group of people that stole the U.S. Presidential Election and also stole parts of the down ballot votes, meaning the Senators and Congressmen.”

General Flynn says the election system must get fixed.  General Flynn warns, “The Arizona Legislature holds the future of our country because if they do not decertify, then these other states like Michigan, Pennsylvania, Wisconsin, Nevada and others . . .If they couldn’t do it, then why should we bother? . . . . If we do not resolve that issue, we cannot move forward with future elections in 2022 or 2024.  Those will be stolen just like the 2020 election.”

General Flynn says there is a giant psyop being run on the American people to take their eyes off of the 2020 election fraud.  General Flynn explains, “Absolutely, Covid . . .Afghanistan, the border situation, and we are not even talking about the border situation anymore because its fallen down in three or four priorities in terms of what people are able to concentrate on . . . . We are going to see President Biden come out to talk about . . . lockdowns . . . and vaccines, and it is all to change the narrative. . . .They are going to try to take away the narrative of what happened in the election.  What they really wanted and believed is the theft of the 2020 election was going to be dead by about March of 2021, and the country would move on.  The American people are not stupid.  We are not a bunch of chumps that Biden has called us.  There is a bunch of intelligent Americans that are tired of the lies spewing out of the White House and spewing out of the mainstream media.”

General Flynn also warns about a financial collapse in October triggered by a budget impasse and Nancy Pelosi.  He talks about China’s infiltration of America that has been going on for decades.  There is much more in the 44-minute interview.